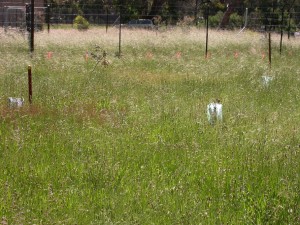 What are the impacts of the two grazers on the grassland diversity and abundance of native herbaceous species? To rigorously answer this question requires the regular monitoring of the presence and population size of native and introduced species in such a way as to remove the influence of soil type or other factors. The small and simple nature of our demonstration project means we could not rigorously answer this question. Instead, we hoped that our regular photographic monitoring would be sufficient to unambiguously identify species in the photographs. This was possible only on the first set of photos. Thereafter, the herbage biomass (abundance) became so large that unambiguous species identification is not possible. Nonetheless, on any day, an interested observer can walk around the boundary fences and compare the species presence and abundance, inside versus outside the plots. A scientifically rigorous answer to this question requires a scientifically designed experiment. Perhaps this is the next stage of this inquiry?