Have you seen Swift Parrots on Mount Majura?

In the past years endangered Swift Parrots visited Mount Majura. We are keen to know whether they return this year. The official 2010 survey will be held on the weekend 15-16 May 2010. 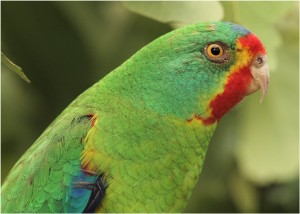 In 2005 and 2008 between end of March and beginning of May Mount Majura hosted a record number of endangered Swift Parrot (Lathamus discolor). The parrots were most frequently observed around the lower Hackett reservoir off Rivett / French Streets feeding on nectar of Bundy and lerp (the sugary protection cover of sap sucking insects).

Swift parrots are small (24cm) and bright grass green in colour. They have patches of red on the throat, chin and forehead, which are bordered by yellow. They have red on the shoulder and under the wings and blue on the crown, cheeks and wings. A distinctive alarm call of kik-kik-kik usually given while flying, a streamlined body, a long tail and flashes of bright red under the wing enable the species to be readily identified.

Please contact Friends of Mt Majura (FoMM) at admin@majura.org if you have observed swift parrots. We would be interested in the date, the time of the day, the location and the number of birds.

The official 2010  Swift Parrot (and Regent Honeyeater) survey will be held on the weekend 15-16 May.

View photos of Swift Parrots at the parrot gallery of the Canberra Ornithologists Group.