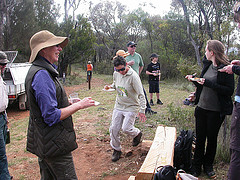 Petition: Return Majura Paddocks back to Nature Reserve. The FoMM Petition to bring back the Hackett Horse Paddocks into the nature reserve was signed by 2645 people and has been tabled in the ACT Assembly by Chief Minister Katy Gallagher on 26 November 2013. Minister Corbell will respond to this petition by 25 February 2014. All indications are that the paddocks will be returned, but the ACT Government may attempt to use them as offset against the use for development of other areas with conservation values. FoMM will vigorously oppose such an attempt. The petition and background information with maps and photographs are at https://majura.org/2013/09/21/petition-to-move-majura-paddocks-back-to-nature-reserve-21092013/

Endangered Golden Sun Moth found on Mt Majura. The Golden Sun Moth, a species of grassy ecosystems, is listed endangered under both ACT and Federal Government legislation. Tony Howard discovered the moth on Mt Majura, which is very good news. Here is his report:

A Golden Sun Moth population in the Reserve
While walking in the north-west part of Mount Majura Nature Reserve, I disturbed what I thought was a butterfly of a species new to me. He had clubbed antennae, but hadn’t behaved like butterflies when landing on the ground after being disturbed, when most raise their wings to reveal the camouflage of their underwings. I took some photos, and after consulting some books, found him to be a male Golden Sun Moth. Very few moth species have clubbed antennae. I have since seen further males in the area. They fly a metre or less above the ground, and often walk on the ground. The photos are both of males. I haven’t seen a female. Females rarely fly, and have yellow spots on the hind-wing, which they can reveal to allow males to locate them visually. Adults live only a few days, and do not feed. The larvae feed underground on Danthonia (wallaby grass) roots and stems. The life cycle is thought to be two years. The Golden Sun Moth (Synemon plana) is classified as Endangered in the ACT. It is classified as Critically Endangered under Commonwealth legislation, although some would suggest that the discovery of new populations should lead to a review of that classification. The new colony has been reported to the Conservation Planning & Research section of the ACT government.

Friends of Mount Majura birthday walk. A small mob of people, including park carers from Jerrabomberra Wetlands, Aranda and Mount Ainslie, joined FoMM on their 10th anniversary birthday walk on 17 November that led past a number of FoMM projects to the sheep camp, where ACT rangers had installed a bench as a birthday present. Noel had made sure that the celebratory indulgences were ready, with Margy’s birthday cake and champagne.  The walk was a great opportunity to see what change can be achieved over 10 years and to recognize the importance of collecting photographic evidence of the change resulting from planned weeding, planting and protecting.

‘Majura’s Treasures’ Book launch: The first ‘Majura’s Treasures’ book was launched at the Conservation Council’s “Living Next To Nature Fair” on Saturday, 30 November. FoMM and the North Canberra Community Council helped develop this guide to interpreting the heritage of Mount Majura and Mount Ainslie. It will be available at FoMM working bees and through the Conservation Council.