Welcome to the December 2014 edition of the FoMM newsletter. On behalf of the FoMM management committee I would like to thank you all for your continued interest and participation over the past year, we really have achieved a huge amount. FoMM President, Jochen Zeil, delivered his report to the FoMM Annual General Meeting on 26 November which highlighted the wide range of these successes and will be available soon on the FoMM website for your perusal. However he also discussed the ongoing issue of kangaroo overgrazing on Mount Majura, the discussion of which will continue next year. Until then, I hope you all have a very happy Christmas and all the best for 2015.
See you on the mountain.
Jo Lynch
FoMM Secretary

End-of-the-Year Working Party – Sunday 21 December, 8am to 12noon
Join the Friends of Mt Majura working party and help remove Honeysuckle in the drainage line close to the Hackett reservoir and Horehound around the plantings in the nearby Majura Paddock. Give half an hour or more: you will make a difference!
Where: Meet at ParkCare notice board opposite of the water reservoir off Rivett Street and French Street intersection
Bring and wear:  Sun protection, body covering garden clothing and sturdy shoes.
Enquiries: Ph. 6247 7515 or email secretary@majura.org
Click here for more information 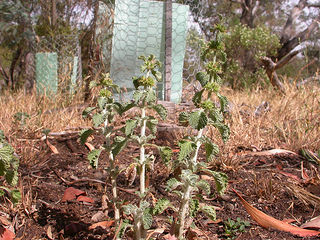 Another new orchid species found on Mt Majura!
The beautiful Diuris dendrobioides, a purple coloured donkey ear orchid was recently found by Michael Doherty. The species is quite rare and is another addition to the many orchids found recently on Mt Majura! 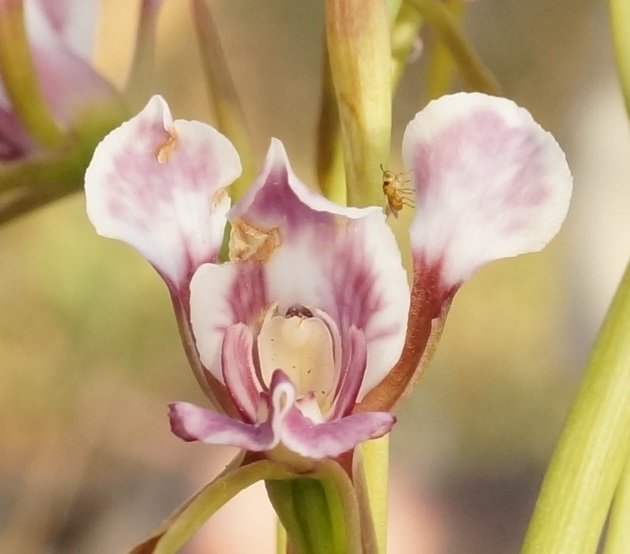 Vegwatch monitoring completed
Over the last two Fridays in November, Sarah Sharp from Friends of Grasslands and Linda Beveridge from Molonglo Catchment Group helped train Fridays@ The Fair volunteers in how to use the Vegwatch Manual. Vegwatch is a monitoring program that will enable us to measure the progress of the revegetation and weed control work at The Fair. A permanent 50m x 20m plot was established in the middle of the revegetation area and various indicators were measured such as plant species diversity, distribution, cover and abundance; revegetation success; habitat condition; and structural diversity. Results will be collated shortly however an impressive 21 native plant species were found in what is a highly degraded area. Monitoring will now be carried out on an annual basis to measure the success of the project over time. The results, along with those of other volunteer groups, will be collated and reported on by the Molonglo Catchment Group. 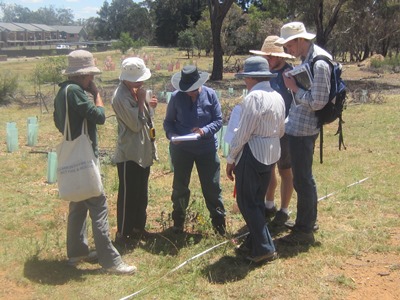 Saffron Thistles @ The Fair
A big thank you to all the volunteers who helped control Saffron thistles at The Fair over the last two Sundays in November. It was a huge success! All of the thistles have now been removed from the site, including one badly infested area featured in the photo below. This has freed up Fridays@The Fair volunteers to undertake some rabbit mapping before Christmas. Marist School students were also a big help recently – they watered the 2014 National Tree Day plants, finished off the wood chip mulching and placed a lot of woody debris around the plantings to protect them from grazing. 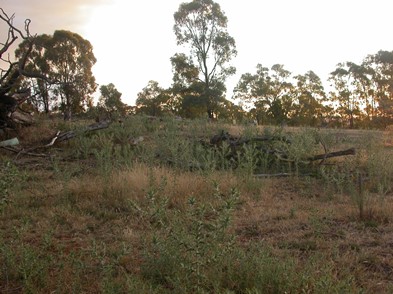 Saffron thistles growing at The Fair which have now all been removed (Photo W. Pix)

Other items of interest:

ParkCare and Landcare Christmas Party – 9 December 5.30pm to 7.00pm at the Himalayan Cedar Forest, National Arboretum
All group members, including children, are welcome to attend. A kids area will be set up with craft and some bush creatures. Drinks and nibbles will be served. People are welcome to stay longer if they wish as a BBQ is available at the site. The Arboretum grounds are open until 8:30 pm. RSVP by 5th December to communityprograms@act.gov.au

Conservation Council ACT region – ‘Love your cat and protect wildlife too‘
If you support protection of Canberra’s pet cats and native wildlife, then please sign their petition for the declaration of Canberra-wide cat containment by 2025. The Conservation Council ACT Region is calling on Minister Rattenbury to: declare, in a timely manner, all new suburbs and urban developments within one kilometre of nature reserves as cat containment; make a forward declaration to make all of Canberra cat containment by 2025; and support and fund ongoing community public education on cat containment in the ACT. Read their letter to Minister Rattenbury about the need for Canberra-wide cat containment, which outlines the detrimental impact roaming cats are having on our local biodiversity. Cat containment not only protects our local wildlife but also benefits the welfare of our pet cats.