Gift your time: Pre-Christmas Work Party – Sunday 15 December 2019, 9am to 1pm
Come along to the last work party for 2019 hosted by Friends of Mt Majura; gift an hour or more to Mt Majura and help to mulch, water, and place debris at our project site in the nature reserve east of The Fair. Morning tea and equipment will be provided by us. Please note that the work party will be cancelled if there is a total fire ban.
Where: Nature reserve east of The Fair, North Watson; access and volunteer registration at park entrance Tay / Ian Nicol Streets.
Bring: Sun protection, drinking water, garden gloves if you have them and wear sturdy shoes.
Inquiries: Email 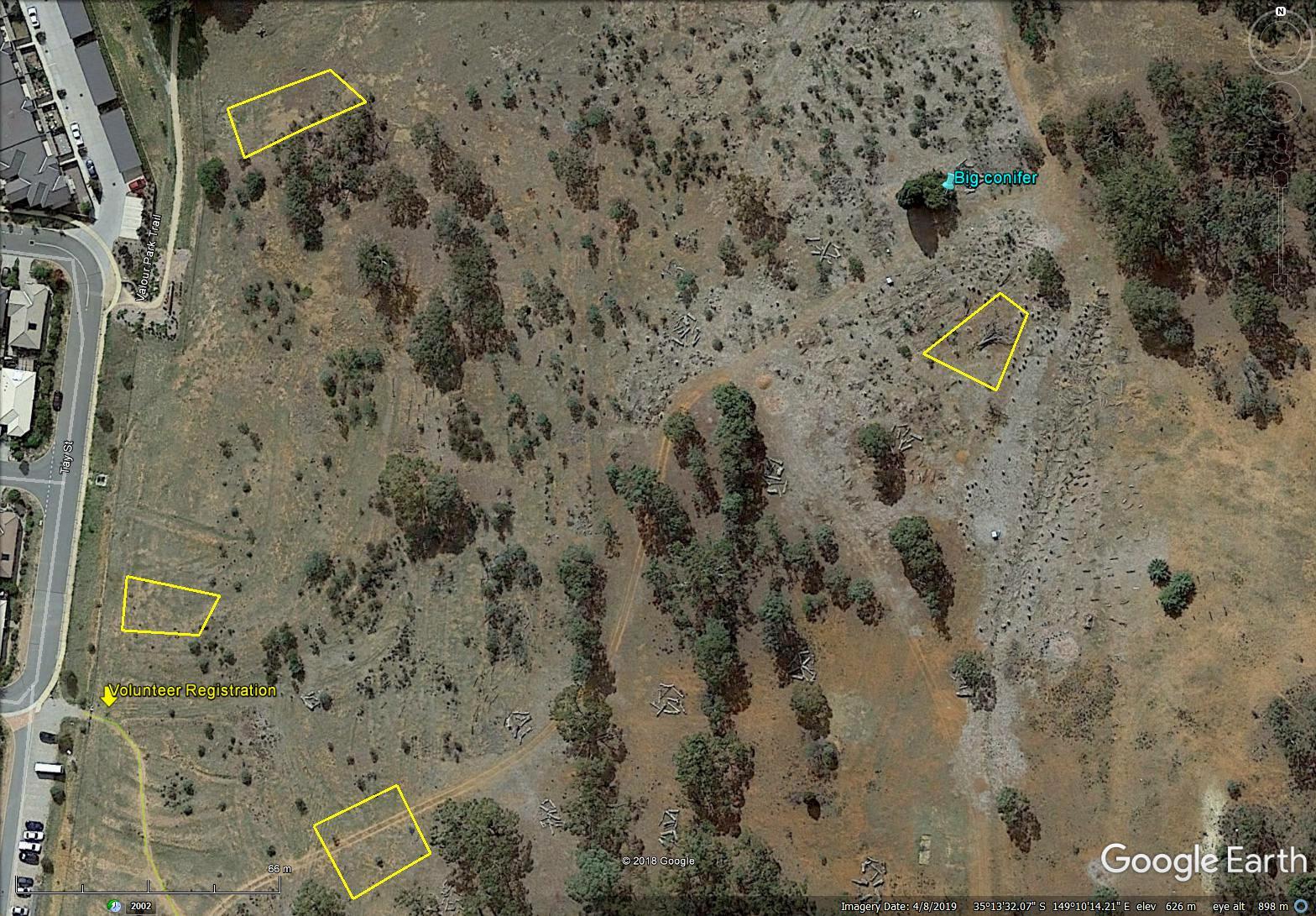 The photograph above shows a bird eye view of The Fair project site, the grey colour around the big conifer is the result of intensive wood chip mulching, yellow outlined are the sites proposed for mulching.

Dumping of garden waste in Mt Majura reserve
Last Friday four FoMM volunteers working on weed management were devastated by the discovery of dumped garden green waste at The Fair woodland regeneration project site, including invasive weeds such as seeding Rumex and exotic grasses. It took the volunteers about an hour to collect as much of the waste as possible, including many of the seeds blown away by the wind (this was only partially successful). Such dumping of garden green waste and weeds into any Canberra ACT Nature Park Reserve is illegal and subject to fines and prosecution. And now that we have access to the ACT Government’s new household green (wheely) bins, totally unnecessary. As a direct result of this particular dumping incident, a large number of invasive weed seeds were dispersed into the reserve. The continuing ecological impact of this event may last over several years and will increase the weed management workload for the already overstretched volunteers. This kind of thoughtless action has a negative environmental impact as well as affecting the mindset and morale of Parkcare Rangers and volunteers. Please report any such dumping incident that you see to the ACT Government here. 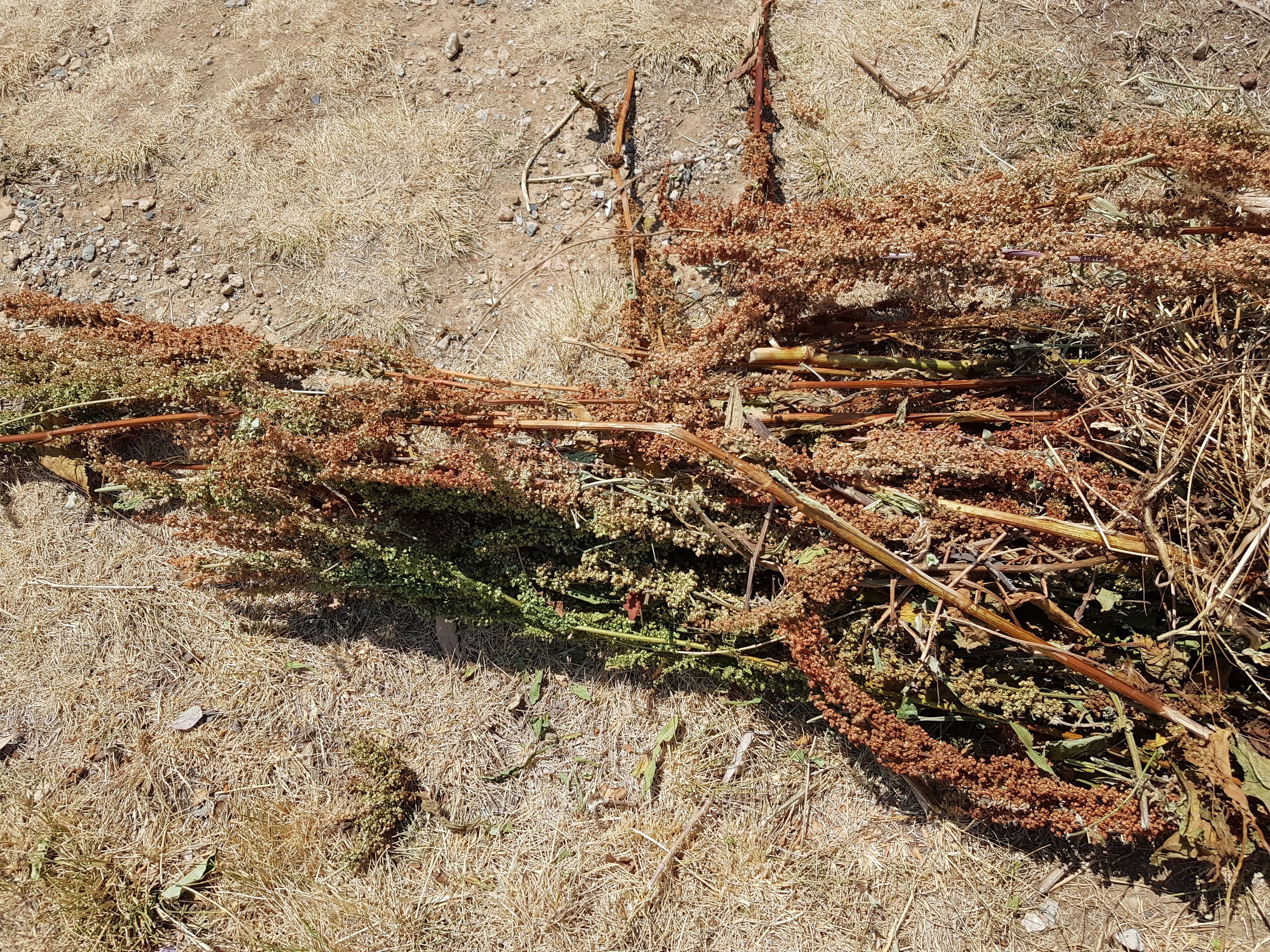 Canberra Nature Park Draft Reserve Management Plan released
The ACT Parks and Conservation Service has developed a draft plan to guide management of the Canberra Nature Park for the next 10 years. The Canberra Nature Park has 37 reserves in and around urban Canberra, including Mt Majura. These reserves give our city its distinctive character as the nation’s ‘city in the landscape’. They protect important forest, woodland and grassland ecosystems and provide habitat for our native wildlife, including many threatened species. They provide the extraordinary opportunity for nature-based experiences and an active lifestyle that so many Canberrans value, contributing significantly to the health and wellbeing of the community. Have your say on the proposed management of Canberra’s Nature Park by 16 December.

ACT Conservation Council’s Inaugural Christmas Auction
The Conservation Council ACT Region’s Inaugural Christmas Auction is live and open for bids until 8 December 2019. This charity auction has a wonderful array of unique and environmentally-friendly items that will make excellent Christmas presents for friends and family, including books, bikes, scooters, clothes, and things for your home and garden. Those who are getting serious about sustainability should be interested in the Zero Mass Water Hydropanels (which make water from air) and the fully installed 5kW solar system from LECA.  Many items can be delivered around Australia, to New Zealand or even further afield internationally – so send this on to friends and family further afield. A Facebook ‘event’ about the auction can be found here. All money raised goes to the Conservation Council. Go to the Christmas Auction’s Allbids page here.

Review of the Environment Protection and Biodiversity Conservation Act 1999 – Discussion paper released
The statutory review of the Environment Protection and Biodiversity Conservation Act 1999 (EPBC Act) commenced on 29 October 2019. Professor Graeme Samuel AC has been appointed as the independent reviewer. An Expert Panel will support and provide advice to Professor Samuel on specific issues. Over the next 12 months, the review will look at how the EPBC Act has been operating, and any changes needed for Australia to support ecologically sustainable development into the future. All Australians are invited to participate in the review. Submissions on the discussion paper are due 14 February 2020. Read the discussion paper here.

Australia’s Strategy for Nature – Department of the Environment and Energy, 8 November 2019
On 8 November 2019, Australian, State and Territory Environment Ministers endorsed a new approach to biodiversity conservation through the Australia’s Strategy for Nature 2019-2030. The Strategy is supported by a dedicated website, Australia’s Nature Hub. Both the Strategy and the Hub are developed and owned by the Commonwealth, all state and territory governments and the Australian Local Government Association. Australia’s Strategy for Nature and supporting website, Australia’s Nature Hub, bring together existing work across the country with the aim to guide the development of new and innovative approaches to biodiversity conservation. It focuses on overarching goals that support healthy and functioning biological systems by promoting a stronger connection between people and nature, improving the way we care for nature, and building and sharing knowledge. Read more.