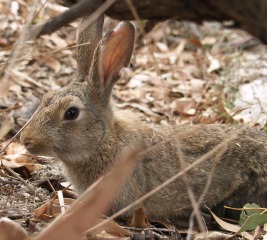 In 2009, the Explaining Change Project  created three sample areas close by the Hackett water tank.  This was so we could assess the relative impacts of rabbit and kangaroo grazing. One plot excludes both kangaroos and rabbits, one plot excludes kangaroos but allows rabbits and the third plot is a control plot where both kangaroos and rabbits can graze.  The first monitoring of these plots was done in November 2010 and follow up surveys have been done in 2011, 2012 and most recently 2013.  The survey method was point-step monitoring.  You can see the full report for years 2009-2012 here.  In addition we have a photographic survey covering the same time period.

It is clear that eliminating all grazing is not ideal as we are getting tussocks that are growing very large and crowding out the native forbs.  In order to generate a healthy grassy area we probably need some grazing (but not too much) or some fire or both.  Below we show the overall results of the four surveys.  If you want the see all the data and lists of the plants surveyed you can download the excel spreadsheet here which contains the results from the 2013 survey. 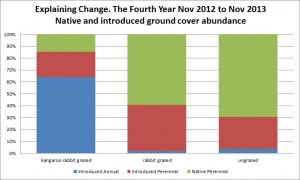 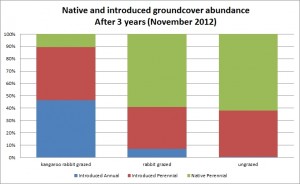 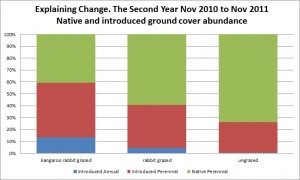 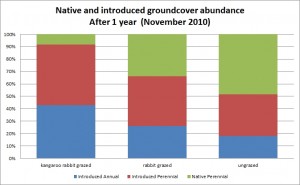