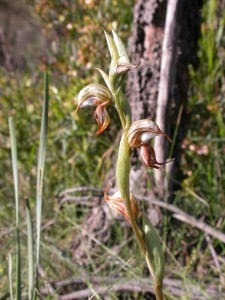 The greenhood orchid Hooked Rustyhood,Oligochaetochilus hamatus syn. Pterostylis hamata was found on Mount Majura in recent days. This is the second orchid species of the genus discovered in the nature reserve (list of Mt Majura / Mt Ainslie plant species). The species is not common in the ACT. It occurs in dry open forest and flowers in spring.

The flowers are transparent with green and brown markings. As in all members of the greenhood orchids, the lateral petals meet the dorsal sepal to form a hood over the fused male and female parts of the orchid, called the column. 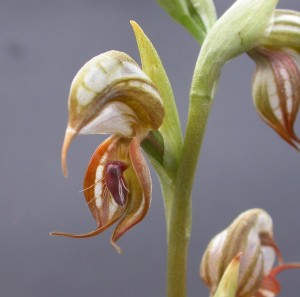 The dorsal sepal abruptly tapers into a fine long tip. The two lateral sepals are joined in their lower parts. Their free parts are tapering into long narrow hooked tails which give the orchid its common name. Their joined parts form a backdrop for a small labellum – the petal situated opposite the column that provides a landing platform for the insect pollinator. The labellum is of a reddish brown colour and has a few long hairs on its margin. It is attached to the base of the column by a sensitive claw. The slightest touch of a landing insect triggers an upward movement towards the column inside the hood.

Waltraud Pix
8 November 2010
Acknowledgment: Information from PlantNET – FloraOnline and from Tony Wood. Many thanks to Tony for the identification of the species.