Horehound, Marrubium vulgare is a common perennial weed of disturbed sites with nutrient-enriched soil such as stock camps (W.Pix).

When: Sunday, 20 October from 9am to about 1pm; give as much time as you like.

Where: “Sheep camp south” Mt Majura ridge; click on this map to view the location of the sheep camp (red marker) and access routes (green lines).

How to get there

(1) From the nature reserve entrance Kellaway Street car park turn left then walk uphill (southeast) on the fire trail named Hancock road; pass the transmission power line easement after about 500m and continue walking uphill close to the saddle; turn left and walk the trail uphill in northeast direction to access the stock camp. The walk will take about 30 minutes from the Kellaway Street nature park entrance. 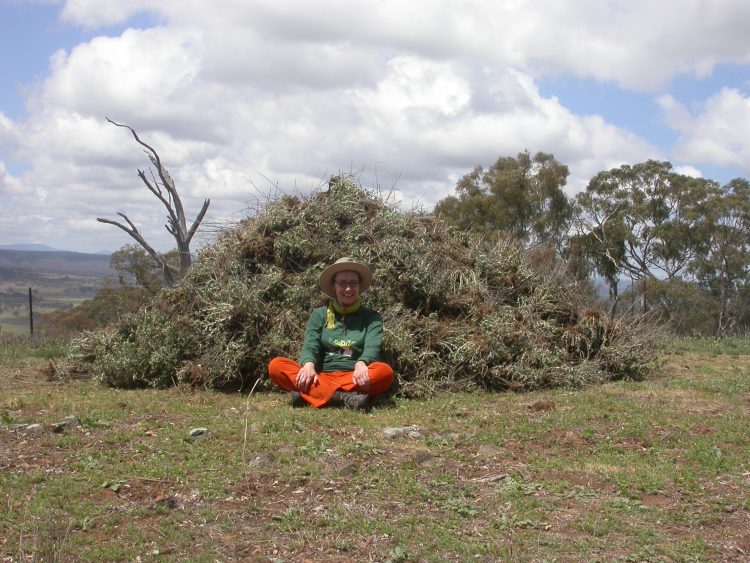 (2) From the nature park entrance Mackenzie Street (roughly opposite Grayson Street) walk in east direction along the maintenance road (Blue Metal Road); at the saddle turn right and pass the upper Hackett water reservoir and walk uphill  in southwest direction to access the stock camp.

Bring: Sun protection, sturdy shoes, drinking water, and gloves if you have them.

Enjoy: A beautiful spring day and fantastic views over Canberra and Majura Valley.

Horehound, Marrubium vulgare L. is native to Europe, the Middle East, and the Mediterranean region including North Africa. It was introduced to Australia in the 19th century as a medicinal herb and became a weed of native grasslands and grassy woodlands where it was introduced with settlers’ livestock.

Horehound is now widespread throughout Australia and is declared under noxious weeds legislation in several Australian states and regions. It occupies disturbed or overgrazed ground and is common on sheep camps, around rabbit warrens and in waste places.

Horehound growth is favoured by grazing because of its high alkaloid content makes it unpalatable to livestock and other herbivores. Once established, the perennial weed persists in native vegetation preventing desirable species from growing. Seeds are primarily dispersed by stock and other furred animals as the fruit or burr readily attaches to fur (and socks!). Water is also an effective dispersal agent, and horses are known to pass the seeds, after ingestion, in a viable condition.

Over the past 13 years, FoMM volunteered 1000 of hours hand-weeding a number of large sites in the Mt Majura nature reserve that were infested with horehound.  The old sheep camp located on a beautiful ridge between Mt Majura and Mt Ainslie is the last vast horehound infested site in the reserve (there are some smaller sites often around trees that indicate old stock rest sites or rabbit warrens).