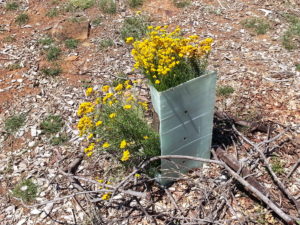 Give a hand and help to water the young plants planted in 2019. If weather conditions are suitable (not too hot) we may also carry out some mulching.

Note: the watering will be postponed to another time if a total fire ban is declared.

Assisted Diversity Regeneration. About Planting at The Fair

The area in the Mt Majura nature reserve east of The Fair is one of the five modified and heavily degraded areas in the reserve where the Friends of Mt Majura (FoMM) run long term projects to reclaim and improve grassy woodlands; the other sites are two old sheep camps located on the Mt Majura ridge, the Majura paddock east of Rivett Street and the associated drainage line, and a cleared section of the west slope east of the Hackett water tank. The original vegetation at those sites was cleared and suites of native trees, shrubs and forbs have been lost and replaced by weeds; ongoing overgrazing prevents natural regeneration which in turn benefits the un-grazed weeds. Other issues are the loss of the surface crust that holds soil together, soil compaction, erosion and loss of top-soil which affects the ability of plants to establish.

As with all FoMM projects, work at The Fair began with an initial assessment in 2011/12, taking into account the introduced and local native plants, the impact of rabbit and kangaroo grazing, the soil condition such as compaction, large bare areas, and active erosion, and the lack of structural habitat elements such as fallen trees and logs.

In 2012, FoMM volunteers began treatment of Paterson’s Curse and Saffron thistles at the least weed-infested southern part of The Fair project site, removed large Briar Roses in the tree cleared area and conducted a mass planting on National Tree Day 2012. Work in 2013/14 included collecting seeds of native understorey plants on Mt Majura and direct seeding of ground cover species, tube stock planting of native shrubs and grassland forbs on National Tree Day 2013, measures to protect the plantings against grazing damage, help with rabbit control and the reintroduction of structural habitat, many hours of weed control, and monitoring weeds, rabbits, signs of natural regeneration and the progress of assisted re-vegetation (tube stock planting and direct seeding).

A great challenge is to replace woody and herbaceous weeds with local native plants under continuous grazing pressure without compromising ecological values of the area such as wildlife habitat or soil stabilisation.

Many species of the native understorey (shrubs and ground layer) do not form persistent soil seed banks and are unable to re-establish without assistance once they are lost from the standing vegetation by clearing, weed competition and overgrazing. We plant clumps of native understory species at strategic sites and hope that the seeds of these “living seed banks” will spread out and one day will take-over sites which are currently weed infested.

The staged process of weed removal, assisted re-vegetation (tube stock planting and direct seeding) and protecting the plantings from being grazed is a much-valued contribution of volunteers, and supported by the Canberra Ornithologists Group and the authorities charged with the management of conservation areas in the ACT such as the Mount Majura nature reserve.

The assisted re-establishment of understorey diversity improves the integrity of the grassy woodland however this assistance is only sustainable if the Government backs up our efforts and manage the grazing pressure that detrimentally impacts upon the grassy woodland and the native species within this endangered ecological community.