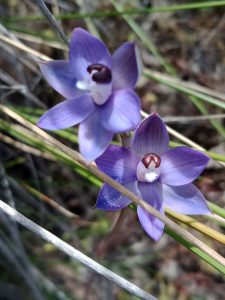 Each year we update the plant lists for Mount Majura and Mount Ainslie and publish the latest list on the Friends of Mount Majura website.

The newest Flora List contains 566 records from Acacia to Zornia. Over the last two years we added 140 new records, 79 in the first year and 61 in the year to 31 August 2022. Of these, 84 had not been previously reported for either Mt Majura or Mt Ainslie; 54 were newly discovered local native species and the other 30 were exotic introductions or, in a couple of cases, Australian species where we are still unsure if they are truly local or introduced as garden escapes.

The Flora List is an important record of what is in the reserves and it is interesting to see how it has changed over time as more species are added, either because they are new introductions – mostly unwanted exotic plants – or local natives which are newly discovered and recorded.

When it was first created in 2006 it listed 274 species. The base data came from a survey of the vegetation of the Ainslie-Majura reserve published in 1974 with additions each year since 2005.

Most of the data comes from the Canberra Nature Map which has a wealth of information about the flora and fauna of the whole region provided by thousands of people who take photographs with location data and load them to https://canberra.naturemapr.org/ Volunteer moderators use the photographs to confirm the identity of the species. For a new species of plant from Mount Majura often a sample is collected and taken to a botanist for confirmation and the sample may be lodged in the herbarium. If it is completely new for the ACT, it will then be included in the next update of the Census of Plants of the ACT. The common names used in our Flora List come from the most recently published Census.

So how is it possible that after all these years there are still so many species being newly reported?

The last two La Nina years have been very wet and thanks to Covid many more people have been walking in our nature reserves with phones which take good photos of beautiful blossoms, birds or butterflies. Canberra Nature Map has grown enormously.

The new native species we have added include wet land plants like rushes and sedges and this last year eight exotic grasses were added, perhaps the wet conditions brought them into prominence. Grasses, rushes and sedges such as these may have been there previously but were overlooked – and they are difficult to identify. 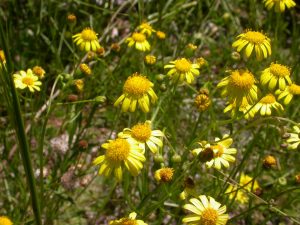 Important weeds – Madagascan fireweed Senecio madagascariensis and inkweed Phytolacca octandra were in the 30 exotics we added in the last two years and tall fleabane Erigeron sumatrensis must have been there for years but went unrecognised until recently.

What other beauties will we find this year?