Talk by Belinda Cooke, Swift Parrot Recovery Coordinator
When: Tuesday 20 May, 7.30pm
Where: Blue Gum School Friends’ Lounge, Hackett shops
Swift Parrots migrate the longest distance of any parrot in the world. They leave their breeding grounds in Tasmania in autumn to forage on the mainland. Hear about the endangered birds and their visits to Mount Majura and view a documentary with fabulous footage by local ornithologist Geoffrey Dabb. 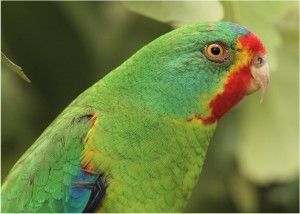 Since mid April 2008 bird watchers have observed more than 20 swift parrots at a time weaving through the canopy of the tall box trees around the drain line at the lower Hackett reservoir. A Hackett resident noticed a small flock as far back as March 2008. In March and April 2005 Mount Majura hosted more than 60 swift parrots, a number never before recorded in the ACT. The parrots were not recorded during 2006 and 2007.
The swift parrot Lathamus discolor is bright grass green in colour, and has patches of red on the throat, chin and forehead, which are bordered by yellow. It also has red on the shoulder and under the wings and blue on the crown, cheeks and wings. A distinctive alarm call of kik-kik-kik, usually given while flying, a streamlined body, a long tail and flashes of bright red under the wing enable the species to be readily identified.
Swift parrots breed in Tasmania and migrate to mainland Australia in autumn. During winter the parrots are semi-nomadic, foraging in flowering eucalypts mainly in Victoria and New South Wales. Small numbers of swift parrots are occasionally recorded in the ACT, south-eastern South Australia and southern Queensland. The parrots choose larger trees for foraging and feed extensively on nectar and lerp from eucalypts during the non-breeding season.