This is the third year of sampling macro-invertebrates in the Majura Dams as part of Project Dragonfly. They were first sampled in spring 2005 to provide a benchmark against which future samples could be compared. As well as our first dragonfly nymph, we found quite a variety of other macro-invertebrates including water boatmen (true bugs), mayfly nymphs, caddis flies, midge larvae, yabbies and freshwater shrimp. Since then samples have been each autumn and spring. This fifth sample, in spring 2007, is two years after restoration work commenced.

We are using a simple scoring system known as SIGNAL2. Bigger scores indicate a more diverse and healthier water body. The scores for each dam are shown in Figure 1. The scores have fluctuated over time with no obvious trend. Sometimes the upper dam scores higher and sometimes the lower dam scores higher. The range of species has remained much the same. In this sampling period, the upper dam scored higher because of the relatively larger number of mayfly larvae which are regarded as indicative of good water quality. The lower dam also had a lot of mayfly larvae but also had more of the ‘lower’ scoring species that pulled its overall score down. Both dams continue to have a relatively healthy and diverse macro-invertebrate fauna.

The total number of macro-invertebrates caught is sensitive to sampling conditions and should be interpreted cautiously (Figure 2). The lower dam shows a marked fluctuation with season with hardly any macro-invertebrates in autumn and lots in spring. For some reason the upper dam does not show this seasonal effect.

No dragonfly larvae were caught in this sample. This does not mean they are not present. They just managed to evade the net. We did however find damselfly larvae for the first time. Damselflies are a close relative of dragonflies. The adults have a slimmer body and, unlike dragonflies, fold their wings along their back when they are at rest. 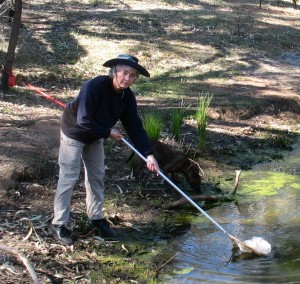