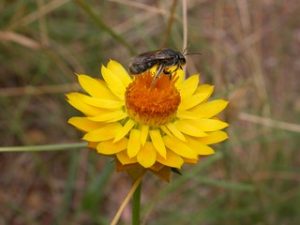 Start the New Year with a good deed and help remove St John’s Wort at wildflower patches close to the North Watson project site on Mt Majura at The Fair.

Friends of Mt Majura will host evening weeding sessions in early January to remove St John’s Wort (StJW) from patches which are rich with native plants.

When: from 6pm to 7.30pm on Thursday 6 January and Tuesday to Thursday 11-13 January; the sessions will be cancelled if it rains. We may continue the sessions after 13 January – please watch this space for further announcements. 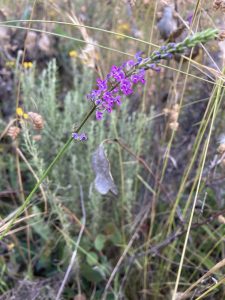 Where: nature reserve south of The Fair project site; meet at 6 pm at the volunteer registration point nature park entrance intersection Tay Street and Ian Nicol Street, The Fair, North Watson; please click on this map to view the point; the first sessions will be around the patch outlined blue on the map.

Bring: Please BYO sun protection, drinking water and garden gloves if you have them; wear long pants and sleeves, and enclosed shoes. We will provide hand sanitiser and disposable gloves. 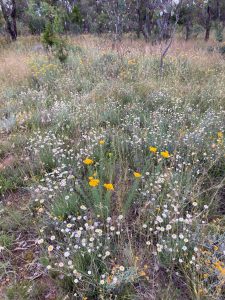 This wildflower patch with Hoary Sunray and other daisies has been freed of St John’s Wort.

We have already started to tackle the first large patch which has a high diversity of native flowers, ferns, sedges and grasses and is one of the native rich sites of Mt Majura’s grassy woodland. 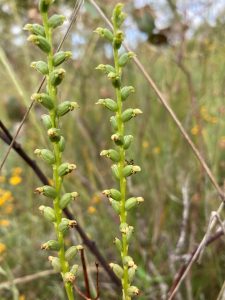 Many dozens of green, slender and easily overlooked Onion orchids growing among daisies. 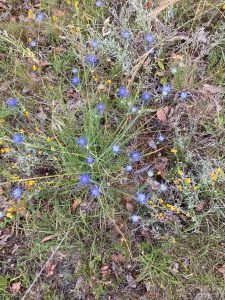 A strikingly blue Blue Devil adds an unusual colour to the flower show.

Hand pulling StJW is the best option where it grows among native plants; grabbing the stems close to their base to pull out the roots to prevent re-sprouting. The soft soil after so much rain makes this an easy task. 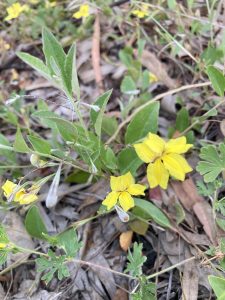 The photos were taken at a wildflower patch that has been freed of St John’s Wort (W. Pix, December 2021)

StJW is extremely invasive in native grassland and grassy woodlands; if uncontrolled it can become a dominate ground cover plant competing with natives. A single plant can produce over 30,000 seeds per year and the seeds can remain viable for over 10 years.
StJW is a perennial plant. A single plant increases in size by growing outwards from the roots in concentric circles. It has two sets of roots, one that grows vertically to about 1 m deep into the soil (depending on the soil condition), and another set that grows horizontally and produce buds that form new aerial growth. Deep soils favour the development of vertical roots, however, in shallow or compacted soils, roots generally grow laterally and sucker more readily. Seeds can germinate from autumn to spring, but new plants do not flower in the first year. It has non-flowering stems that grow from the crown during autumn and winter and die in late spring and flowering stems that grow from the crown each spring.
StJW spreads by seeds and lateral roots. Seeds are spread by water, vehicles and machinery, and animals including humans. The sticky seed capsules adhere to animals and machinery, hence it’s spread along tracks and transmission power lines which often initiate infestations of larger tracts of land. The roots of StJW sucker and grow from fragments; therefore cultivation can spread the weed unless the roots are brought to the surface and dried out.
Further reading
http://www.molonglocatchment.com.au/Weeds/Documents/Factsheets/StJohnsWort.pdf
http://www.dpi.nsw.gov.au/__data/assets/pdf_file/0007/193075/St-Johns-wort.pdf
https://en.wikipedia.org/wiki/Hypericum_perforatum