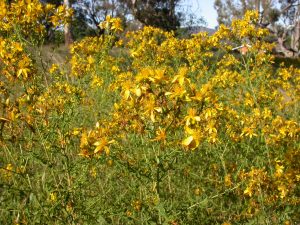 Start the New Year with a good deed and help remove St John’s Wort at wildflower patches close to the North Watson project site on Mt Majura at The Fair.

Friends of Mt Majura will host evening weeding sessions in January to remove St John’s Wort (StJW) from patches which are rich with native plants.

When: Tuesdays, Wednesdays and Thursdays from 6pm to 7.30pm; we will be starting on Tuesday 3rd of January 2023.

We will be revisiting the Wildflower Patches – outlined blue on the map – with a high diversity of native flowering plants, sedges, grasses and ferns that we tackled last season and extend the removal of StJW around those patches to create a barrier; the first sessions will be at Wildflower Patch 1 the blue outlined polygon furthest south on the map.

Bring: Please BYO sun protection, drinking water and garden gloves if you have them; wear long pants and sleeves, and enclosed shoes. We will provide hand sanitiser and disposable gloves.

The highly invasive StJW had another good season following three La-Nina years in a row. It threatens the native understorey of Mt Majura’s grassy woodlands and open forests.

Where it grows among native plants, hand pulling is the best option. Grab the flower stems close at their base and pull slowly; this would help to remove much of the underground stems (rhizomes) and reduce re-sprouting.

StJW is extremely invasive in native grassland and grassy woodlands; if uncontrolled it can become a dominant ground cover plant competing with native plants. A single StJW can produce over 30,000 seeds per year and the seeds can remain viable for over 10 years.

StJW is a perennial plant. A single plant increases in size by growing outwards from the roots in concentric circles. It has two sets of roots, one that grows vertically to about 1 m deep into the soil (depending on the soil condition), and another set that grows horizontally and produces buds that form new aerial growth. Deep soils favour the development of vertical roots, however, in shallow or compacted soils, roots generally grow laterally and sucker more readily. Seeds can germinate from autumn to spring, but new plants do not flower in the first year. It has non-flowering stems that grow from the crown during autumn and winter and die in late spring and flowering stems that grow from the crown each spring.

StJW spreads by seeds and lateral roots. Seeds are spread by water, vehicles, and animals including humans. The sticky seed capsules adhere to fur, socks and machinery, hence it’s spread along tracks and transmission power lines which often initiate infestations in larger tracts of land. The roots of StJW sucker and grow from fragments; therefore cultivation can spread the weed unless the roots are brought to the surface and dried out.