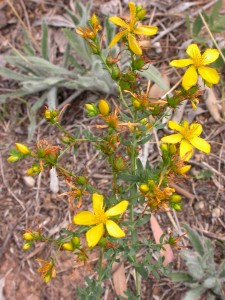 St John’s Wort flowers, flower buds and fruits (W.Pix). One individual plant can produce over 30,000 seeds per year which stay viable over 10 years.

When: Sunday, 24 January, 9am – 12noon
Where: Nature park east of The Fair, North Watson; access park entrance Tay / Ian Nicol Sts
What: Cut-off and bag seed heads of St John’s Wort.
Bring: Sun protection, sturdy shoes, body-covering clothing, secateurs or scissors.
Bags and some tools and will be provided.
Come early for an introduction and give as much of your time as you want.

St John’s Wort at The Fair
St John’s Wort (StJW), Hypericum perforatum is one of the many weeds that grow in the nature reserve east of The Fair. In 2011 the Friends of Mt Majura began work to control weeds and enhance the native biodiversity of this area and started StJW control in summer 2013/14. Control measures include spraying the flowering plants with the herbicide Starane and removing developing seed heads from the site.

StJW is extremely invasive in native grassland and grassy woodlands; if uncontrolled it can become a dominate ground cover plant competing with natives. A single plant can produce over 30,000 seeds per year and the seeds can remain viable for over 10 years.
StJW is a perennial plant. A single plant increases in size by growing outwards from the roots in concentric circles. It has two sets of roots, one that grow vertically to about 1 m deep into the soil (depending on the soil condition), and another set that grow horizontally and produce buds that form new aerial growth. Deep soils favour the development of vertical roots, however in shallow or compacted soils, roots generally grow laterally and sucker more readily. Seeds can germinate from autumn to spring, but new plants do not flower in the first year. It has non-flowering stems that grow from the crown during autumn and winter and die in late spring, and flowering stems that grow from the crown each spring.
StJW spreads by seeds and lateral roots. Seeds are spread by water, vehicles and machinery, and animals including humans. The sticky seed capsules adhere to animals and machinery, hence it’s spread along tracks and  transmission power lines which often initiate infestations of larger tracts of land. The roots of StJW sucker and grow from fragments; therefore cultivation can spread the weed unless the roots are brought to the surface and dried out.
Further reading
http://www.molonglocatchment.com.au/Weeds/Documents/Factsheets/StJohnsWort.pdf
http://www.dpi.nsw.gov.au/__data/assets/pdf_file/0007/193075/St-Johns-wort.pdf
https://en.wikipedia.org/wiki/Hypericum_perforatum