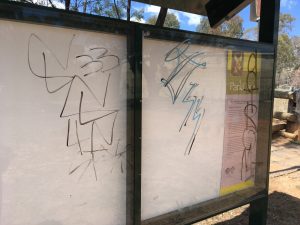 During a recent pleasant weeding session at The Fair project site I spotted a flowering plant that I haven’t seen before. I took photographs and uploaded them on Canberra Nature Map; see this sighting.

The ACT Weed Officer Steve Taylor confirmed the species to be Fireweed, Senecio madagascariensis, a highly invasive and toxic pest plant which is declared a Weed of National Significance.