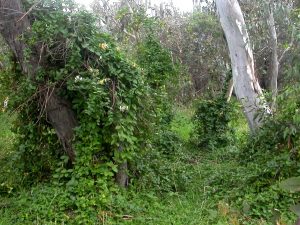 The Friends of Mount Majura will be hosting a working party on Sunday, 30 April to remove Japanese Honeysuckle from a gully in the nature reserve behind Mackenzie Street, Hackett. This work party follows up work to remove the bulk of Honeysuckle from the gully in Spring 2015. Follow-up work is crucial to remove all stems that potentially develop new plants. Make a difference: give an hour or more of your time and help remove this invasive plant.

When: Sunday 30 April, 9 am to 12 noon
Where: Meet at the nature park access close to Mackenzie Street intersection with Russell Street and Hull Place (south of 85 Mackenzie St); view this map with meeting point and work site.
Bring and wear: Sun protection, body covering garden clothing and sturdy shoes.
Inquiries: secretary@majura.org
Contact during event: 0435 357 172
Promotion of event: download this Poster 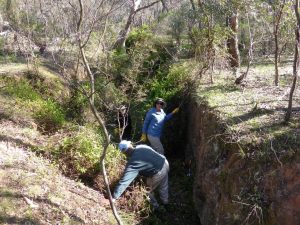 Honeysuckle goes bush
Japanese Honeysuckle, Lonicera japonica has been used in older gardens as a plant of choice to cover unsightly structures, tree trunks and fences. The semi-deciduous plant grows easily, quickly and vigorously from stem layering and provides a dense screen for most of the year. And this is the rub. It was a not uncommon practice to dump pruned stems over the backyard fence where they started a new life smothering native plants and destroying habitat for native wildlife.

Japanese Honeysuckle is a declared Pest Plant in the ACT and regarded as an environmental weed in all Australian states and territories except in the Northern Territory. It also appears in the Global Invasive Species Database (GISD).

The perennial vine climbs by twisting stems around vertical structures, including the limbs and trunks of shrubs and small trees. This robust and vigorous ornamental plant has been frequently cultivated in Canberra’s gardens to cover up unsightly structures and fences. It escaped gardens and became a serious weed of moister sites such as gullies and drainage lines where it smothers and out-competes native vegetation, stunts the growth of shrubs and trees and prevents regeneration of native species. 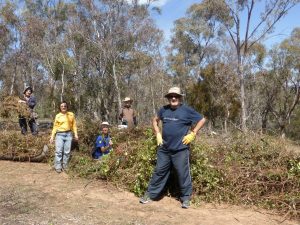 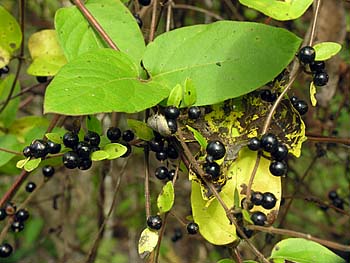 Japanese Honeysuckle spreads by seed and vegetatively. It produces several meters long runners that develop roots where the stem and leaf junctions (nodes) come in contact with the soil. Underground stems (rhizomes) help to establish and spread the plant locally. Long distance dispersal is by birds which readily eat the black shiny fruits and defecate the seeds at various distances from the parent plant. Japanese Honeysuckle was often dumped in Mt Majura’s bushland behind Hackett gardens.