Water (and feed) our Wildlife. Some thoughts and observations of a ParkCare volunteer. 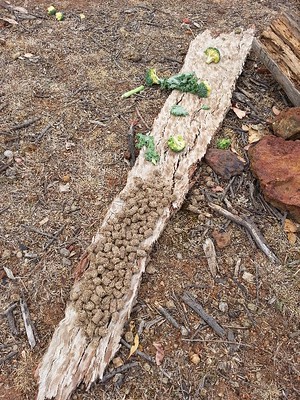 The record high temperatures, drought and raging fires this 2019/20 Summer season have caused enormous losses of habitat, wildlife (animals and plants), and general damage to our treasured ACT landscape and woodlands.

Caring people in many locations sprang into action by providing containers with water on the kerbside of their gardens as well as water and food stations in the urban Nature Reserves.

However, there is a downside to this kind of Labour of Love which may cause unintended outcomes.

I am a ParkCare volunteer, who works in the Mt Majura and Mt Ainslie Nature Parks since 2003 to improve the habitat of native animals and the diversity of native plant species upon which the native animals depend.

I acknowledge the great effort from a large number of people who really care, want to help and who went out of their way to organise containers and supplied water and food. The WoW Facebook registered over 5000 (!!) people (including from outside Canberra).

In context, please note that if only a tenth of the WoW people volunteered over the years to improve the conservation values of Canberra Nature Parks, our urban nature reserves would be in significantly better shape to resist adverse weather conditions and to provide a better habitat for our local wildlife.

My belief (backed up with observations as evidence) is that the main beneficiaries of water and food stations, at least within the Mt Majura nature reserve, were kangaroos, pests and urban dwellers some of which pose a threat to native wildlife.

Most of the food and water stations provided in the Mt Ainslie and Mt Majura reserves were located in the Grassy Woodlands at the mountains’ foot slopes which are close to the suburban fringe and relatively easy to access.

Some food stations were provided with hay pellets or loose hay, some had carrots, corn and broccoli, a vegetable that can harm native animal species. Some food and water stations were sited directly at the entrances of rabbit warrens. 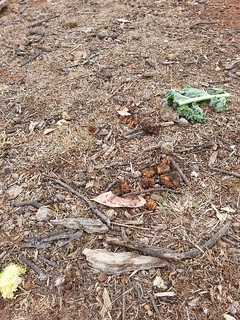 In the reserve east of “The Fair” (Mt Majura Nature Park), we found not only rabbit and hare droppings around the water and food stations but also fox scats. Foxes, being omnivorous, have been attracted either directly by the food, or indirectly by the presence of the rabbits and hares that attended the food stations.

We were quite alarmed when we observed at one of the water point, the first Common (Indian) Myna birds recorded in the area. And only recently, Noisy Miners* were observed in large numbers (up to 20) in the area whereas in previous years we observed the occasional Noisy Miner visiting the site. Most likely, the comparative absence of these two aggressive bird species accounted for the presence of little woodland birds in the reserve east of The Fair.

Friends of Majura worked hard over the past seven years to improve the habitat of declining little woodland birds in this area. The attraction of Common Myna and Noisy Miner can spell the end of little woodland birds in their last refuge on the west slope of Mt Ainslie and Mt Majura. Surely this is NOT the intention of WOW group of people putting out the water and food to assist stressed wildlife.

Rabbits are browsers that eat tree and shrub seedlings, ringbark trees and disturb soil through their intense digging. Friends of Mt Majura and many other ParkCare groups have spent 1000s of hours to monitor and map the warrens of rabbits in a joint program with Parks and Conservation Service to control this serious pest. Unintentionally “Pampering” this pest runs counter to all the work to protect ecological communities including native wildlife.

The semi-enclosed Eastern Grey Kangaroo population on Mt Ainslie and Mt Majura is more than five times of what is sustainable and too large to be fed with hay at some feeding stations. ParkCare people having volunteered over many years to control herbaceous weeds in the critically endangered grassy woodlands and are rightly concerned about the potential reintroduction of weeds by spreading hay in the reserve. However it is not only about weeds, but there are also concerns about the wellbeing of animals. The animals may become dependent on the food and may not disperse when the weather conditions and the ground cover improve. The closeness to main walking tracks means more frequent encounters with dogs on and off-leash. Surely, already stressed kangaroos need to save every bit of energy; luring them to food stations where stressful dog encounters are likely may run counter to the good intentions to help.

*The density of Noisy Miner populations, an endemic species to eastern and south-eastern Australia has significantly increased in many locations across its range, particularly in human-dominated habitats. The Noisy Miner is a native honeyeater species that defends habitat aggressively, excluding smaller birds from favoured woodland habitat. The Noisy Miner has been declared a threatening process under Commonwealth legislation in 2014 (http://www.environment.gov.au/biodiversity/threatened/key-threatening-processes/overabundant-noisy-miners). 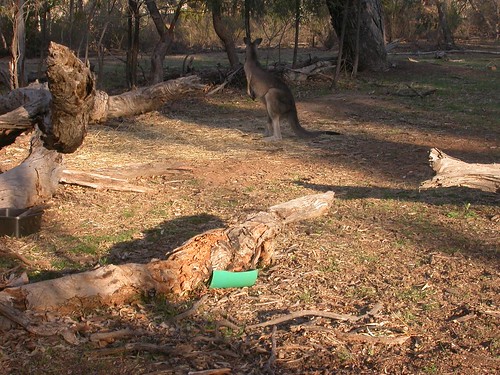