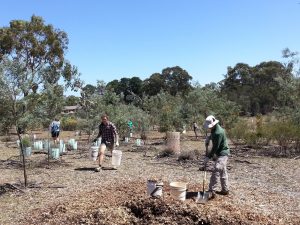 Mulching at The Fair in February 2019

Join in the working party at The Fair on Sunday 17 March and help tackle suckers of English Elm, removing tree guards that are outgrown by their inhabitants and spreading mulch around plantings.

When: Sunday 17 March 9am – 1pm; give as much time as you like however, we ask volunteers who intend to control woody weeds to come at 9am for an introduction (target weeds, the method of control, safe use of herbicide and equipment).

Removal of English Elm. We will be using the cut & dab method to control English Elms and other woody weeds which involves the use of glyphosate. Please come at 9am for an introduction and wear long sleeves & pants if you want to help with the control of woody weeds. If you don’t want to use herbicide there are other tasks that don’t involve the use of it.

English Elms produce a lot of horizontal roots which can produce suckers particularly when the parent plant is cut down. Suckers are plants growing from root buds of the parent. FoMM carried out two follow-up control sessions to remove new suckers after the initial March 2016 working party. Each time we achieved a reduction of suckers and we hope this will be our last follow-up session.