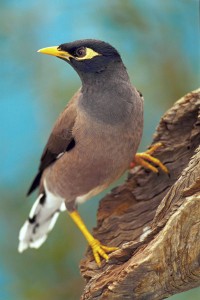 Talk by Bill Handke, Canberra Indian Myna Action Group
When: Thursday 15 May, 7.30pm
Where: Blue Gum School Friends’ Lounge, Hackett shops
Hear about a community effort to reduce the numbers of Indian (or Common) Myna, the success it is having, and how you can help.
The introduced Myna birds aggressively compete with native birds and mammals for nesting tree hollows. They fight for hollows, destroy eggs and chicks of native birds like Rosellas. They evict Sugar Gliders from hollows, which means the death sentence for these small mammals because they have nowhere to go. The impact of the Indian Myna on hollow dependant native fauna is severe as nesting hollows in our cleared landscapes are in short supply.
For more information go to www.indianmynaaction.org.au

Hackett residents who want to get involved in Indian Myna control or for enquiries please contact ph 6247 7515 or e-mail admin@majura.org

The talk is part of a free lecture series Hilltop to Backfence – Celebrating 5 years of ParkCare on Mount Majura. The lectures cover a range of local environmental issues and explore biodiversity at our doorstep.

Common Indian Mynas were brought to Melbourne in 1862 to control insect pests in market gardens, but even though they were not successful at this, they were taken from Melbourne to many other places in Australia, including north Queensland, where it was thought they would control insect pests of sugar cane. Cane Toads were introduced to Queensland for the same reason and have also become pests. Common Indian Mynas have established feral populations in many parts of the world.
Common Indian Mynas can be an economic problem because they damage fruit and grain crops and their noise and smell can be annoying where they are in large numbers. Mynas can also spread mites and they have the potential to spread disease to people and domestic animals. Mynas become quite fearless of people if they are not hassled and can be a problem in outdoor eating areas by stealing food off people’s plates. There are a few records of mynas attacking people, but this is not common.
Perhaps the Common Indian Myna’s most serious “crime” is that it competes aggressively with native wildlife for nesting hollows. Common Indian Mynas nest in tree hollows, or places like them, such as holes in roofs. Hollows are in short supply over much of Australia because of clearing for agriculture.
Mynas reduce biodiversity by fighting for hollows with native birds like Rosellas, destroying their eggs and chicks and stopping them from breeding. Indian Mynas are capable of evicting even large birds such as Kookaburras and Dollar Birds from their nests. They also evict small mammals, like Sugar Gliders from hollows – which commonly means a death sentence for the Gliders because they have nowhere else to go. It is not uncommon for groups of mynas to mob other birds and mammals like possums.