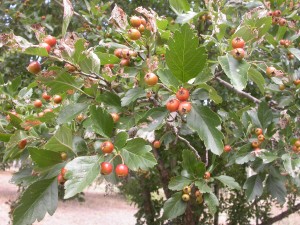 Fruiting Hawthorn at Valour Park (W.Pix 01.03.2015). Removal is most important to avoid dispersal of this declared pest plant in the neighbouring nature reserve.

Over the past years Friends of Mt Majura held several working parties at Mt Majura’s northwest slope to remove woody weeds. About 80% of the weeds were Hawthorn, Sweet Briar Rose, and Cootamundra wattle – some were quite large shrubs or small trees – and of the remainder, Nettle tree, Cotoneaster and Firethorn were most prevalent. All of these invasive environmental weeds are listed as Declared Pest Plants under ACT legislation. 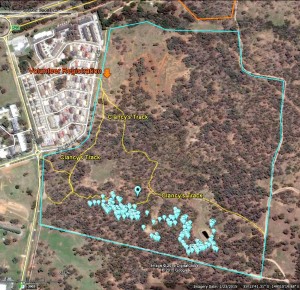 The  map shows the area outlined in blue where we removed woody weeds; the area is bounded by Oldfield track in the south (the fire track that runs between the horse paddocks and the nature reserve), Antill St and The Fair in the west, Valour Park in the north and Centenary Trail in the east.

On the 15 February 2015 fourteen volunteers conducted a follow-up woody weed working party roughly covering the area south of Clancy’s track. We cut and daubed literally 100’s of small Hawthorns and Sweet Briar roses which made up over 95% of the encountered weeds in about equal parts .

The blue balloons on the map are GPS records of weeds that one volunteer treated. Each of the balloons represents one weed except the large isolated blue balloon with a dot which represents a whopping amount of 154 weeds in an area the size of roughly 200 square meters.

What can be done?

Hawthorn, Briar Rose, Cootamundra wattle, Nettle tree, Cotoneaster and Firethorn reproduce by seeds. Birds who eat the fruits are the most important means of dispersal and spread.

The most important action to reduce the spread is therefore to destroy existing infestations of mature environmental weeds.

Come along to our woody weed working parties at the northwest slope and help remove mature weeds – next working party, Sunday 15 March 2015; click here for details.

Help replant with indigenous species to provide protective habitat for woodland birds at FoMMs National Tree Days or at our Fridays @ The Fair working parties.

Territorial and Municipal Services is responsible for managing Valour Park where large hawthorn trees occur. We will remind the Minister for TAMS, Shane Rattenbury to replace the Hawthorns with species that do not invade the neighbouring nature reserve as he promised at the launch of the park in 2014.