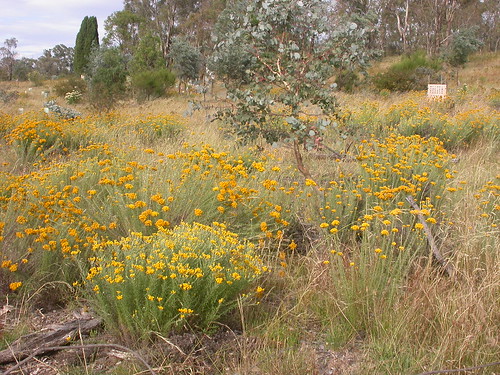 Clustered Everlastings thriving and spreading at The Fair (W.Pix, 28 December 2016)

Help tackle St John’s Wort and other herbaceous weeds at the Friends of Mt Majura working party on Sunday 19 February; come early for a cool start and stay as long as you like.

When: Sunday, 19 February, 8am – 12noon
Where: Nature park east of The Fair, North Watson; access park entrance Tay / Ian Nicol Sts; view this map to see the work party site, access and volunteer registration point
What: Cut-off and bag seed heads of St John’s Wort.
Bring: Sun protection, sturdy shoes, secateurs or heavy duty scissors if you have them.
Bags and some tools will be provided.
Please RSVP: secretary@majura.org

St John’s Wort (StJW), Hypericum perforatum, a native plant of Europe, Asia and North Africa, was introduced to Australia in 1875 as a garden plant and is now a serious weed in ACT, NSW, Victoria and South Australia. If uncontrolled this highly invasive species can out-compete the native grassland and grassy woodland ground cover plants and become the dominate ground cover. A single plant may produce over 30,000 seeds per season which remain viable in the soil for over 10 years.

Friends of Mt Majura began control of St John’s Wort at the grassy woodland reclamation project in the nature reserve east of The Fair in summer 2013/14 by spot-spraying flowering plants with the herbicide Starane and by hand-removing seed heads. Plenty of rain in winter and spring 2016 triggered growth of a large amount of StJW and despite an huge effort to spray the weed, patches of untreated StJW remain. The aim of this working party is to remove as many of the developing seed heads as possible. Although this will not kill the plants it will reduce the amount of seeds newly added to the soil seed bank. 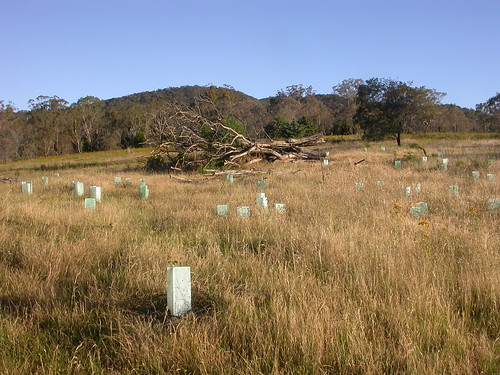 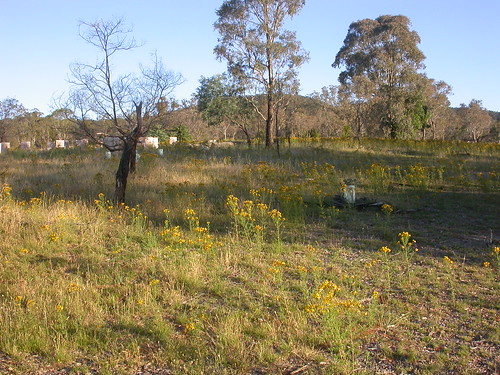 Experimental spraying of St John’s Wort rosettes. Spraying of St John’s Wort is prescribed when it is in flower (November to January), because at this time it is easily seen and most sensitive to herbicides. However there are disadvantages: the weed must be sprayed from top to toe which may damage non-target species  and summers are high wind times which narrows the time-window to treat the weed. For these reasons an experimental spraying of St John’s Wort in the rosette stage was carried out at The Fair in autumn 2016, so far with promising results.  The photographs on the left show a small site sprayed on the 20 May 2016 (top) and a comparable site that has not been sprayed approximately 50m to the south of the sprayed site. We hope to repeat this experiment more systematically in autumn 2017, spraying a few more and larger plots and proper monitor the results.

More about St John’s Wort
StJW is a perennial plant. A single plant increases in size by growing outwards from the roots in concentric circles. It has two sets of roots, one that grow vertically to about 1m deep into the soil (depending on the soil condition), and another set that grow horizontally and produce buds that form new aerial growth. Deep soils favour the development of vertical roots, however in shallow or compacted soils, roots generally grow laterally and sucker more readily. Seeds can germinate from autumn to spring, but new plants do not flower in the first year. It has non-flowering stems that grow from the crown during autumn and winter and die in late spring, and flowering stems that grow from the crown each spring.
StJW spreads by seeds and lateral roots. Seeds are spread by water, vehicles and animals including humans. The sticky seed capsules adhere to animals and machinery, hence it’s spread along tracks and  transmission power lines which often initiate infestations of larger tracts of land. The roots of StJW sucker and grow from fragments; therefore cultivation can spread the weed unless the roots are brought to the surface and dried out.
Further reading
http://www.molonglocatchment.com.au/Weeds/Documents/Factsheets/StJohnsWort.pdf
http://www.dpi.nsw.gov.au/__data/assets/pdf_file/0007/193075/St-Johns-wort.pdf
https://en.wikipedia.org/wiki/Hypericum_perforatum