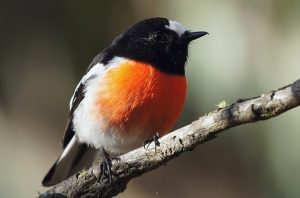 Scarlet Robin. The photo by David Cook depicts a male with its bright red chest

Peter Miller led sixteen other bird enthusiasts through bush land uphill from ‘The Fair’ on an interesting and productive bird walk. The group included Robyn (with a group of friends), whose wish was to spot a Robin on her birthday bird walk, and a five-year-old budding naturalist who was interested in birds and things closer to the ground.  He was excited to spot a number of large pupa cases of rain moths (Abantiades atipalpis) which had emerged from the ground after recent rain. 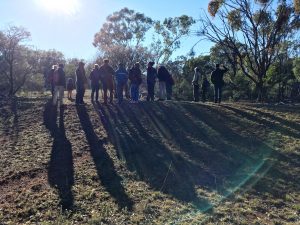 Robyn was overjoyed to sight several male Scarlet robins with bright red breasts perched in brilliant sunshine on the tips of branches high up in bleached tree skeletons, and a few less conspicuous female robins lower down.

We listened for and located several mixed feeding flocks, which included spotted and striated pardalotes, weebills, thornbills, eastern spinebills, white-eared honeyeaters, golden whistlers etc, which were feeding high in the canopy and amongst dense mistletoe foliage.

A pair of galahs were renovating a tree hollow in a large dead Eucalypt, a flock of red wattlebirds and small groups of crimson and eastern rosellas flew overhead.

It was a challenge to see a small group of foraging speckled warblers which were camouflaged on grassy patches shaded by native cherry trees.

We look forward to organising another bird walk with Peter in Spring.

Find some beautiful photographs of Scarlet Robin (males and females) and Spotted Pardalote (collecting nest material) taken recently (24 May) east of The Fair by a Friend of Mt Majura.