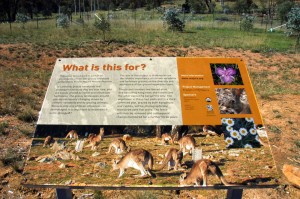 The aim of this Project is to demonstrate the relative importance of climate and of herbivore grazing on the ground vegetation of the grassy woodlands of Mount Majura.

Our Project began in late October 2009 and involves an Animal Sieve and the monitoring of the ground layer over a number of years.

The Animal Sieve divides an area of grassland into three small 10m x 10m plots (diagram layout of plots). Specially designed fencing keeps kangaroos out of one plot but allows rabbits (and hares) in. It keeps both kangaroos and rabbits out of the second plot. It allows both to graze in the third plot. The native (Eastern Grey) kangaroo and the introduced (European) rabbit are the two principal herbivores that graze the grasslands of the Reserve.

Why this project?  Like many visitors to the park, we look for changes in the ground layer vegetation – grasses and broadleaf herbaceous plants (forbs).  Over the past years we have witnessed significant decline in grassland abundance and diversity.  For example, in the area behind the lower Hackett reservoir, 2005 photographs show an abundance of flowering native grasses (flowering Wallaby Grass Austrodanthonia caespitosa, Mt Majura nature reserve, December 2005) where in 2010 there are only a few.

We ask: why the big reduction of the grassy layer, and is this change permanent? We think of two plausible answers.

The first is seasonal (year-to-year) variation in rainfall.  In Canberra most grasses and forbs respond best to winter and spring rain, some forbs and grasses respond best to summer rain while others may flower from spring through to autumn depending on the soil moisture.  There are now so few grasses and forbs because, during the last few years, both summer and rainfall has been very low.

The second plausible answer is grazing pressure.  While the Reserve is protected from grazing by sheep and cattle, there has been no management of grazing by kangaroos and rabbits.  In the last few years, populations of both these grazers have substantially increased. Also, because rainfall has been low, their grazing impact on the ground layer is now greater than before.  That is why much of the once grassy Reserve is now a closely cropped lawn, grazed to ground level (closely grazed Redleg Grass Bothriochloa macra, Mount Majura nature reserve, July 2008). The close grazing prevents reproduction of grasses by seed and raises the risk of drought-induced death. The result is loss of diversity, loss of plant cover and active erosion (overgrazed area behind lower Hackett reservoir, Mount Majura nature reserve, June 2009). The only obvious grass species are the less palatable ones, such as the native Speargrasses (Austrostipa species) and the Redleg Grass (Bothriochloa macra) that can persist under grazing because of its spreading growth habit. The most abundant flowering forb is the inedible Mustard Weed (Sisumbrium officinale) and Horehound (Marrubium vulgare).

Which of the two factors – rainfall or grazing pressure – was more important?  If we don’t know which, then how can our much-valued Nature Reserve be effectively managed, and thereby conserved?  We can’t decide now because we have only opinions but no data: while the rainfall was recorded, there were no measurements of kangaroo and rabbit populations over the last five years.  Highly relevant though, are the recent rabbit surveys by ParkCare volunteers that reveal unnoticed and alarmingly high numbers of active warrens (map of 2009/10 rabbit data).

This brings us back to the Animal Sieve Project. FoMM was successful in obtaining funding from the ACT Government to establish this public education project. It cannot explain the changes of the past five years. However, because all three plots will receive the same rainfall but very different grazing regimes, over the next five years this project will answer the question: what is the most important influence on the diversity and abundance of the grassy layer within Mount Majura Nature Reserve – seasonal rainfall variation or grazing by kangaroos and/or rabbits.

FoMM volunteers will photographically record the changes. The changes will also be obvious to the interested walker because you are free to walk around each plot and closely examine them. Information is provided on a nearby signboard.

We intend that the fencing will be temporary: the change will be recorded for 5 years, then the fence will be removed and the subsequent change monitored for a further 3 years.

We hope that you will enjoy it now, and continue to follow the grassland changes as you see them and as they will be photographically captured and displayed.

Copies of the original high resolution photography are available on CD by contacting admin@majura.org.