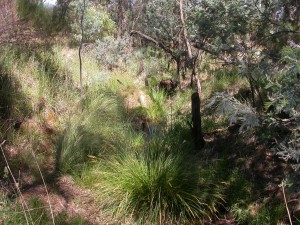 The drainage line near the Hackett reservoir is threatened by garden escapes. (Photo: Waltraud Pix)

High risk invasive weeds found at garden dumping sites
Last month FoMM volunteers found Rambling dock (Actetosa sagittata) and Bridal creeper (Asparagus asparagoides) at garden refuse dumping sites in the nature reserve east of Mackenzie Street, Hackett. The finding of Rambling dock alerted ACT weed officers and triggered a fast response of the ACT Parks Service high risk invasive plant team who spent hours to destroy the weeds and searched the area to ensure all plants were treated. Rambling dock, recorded for the first time in the ACT, requires special treatment and must not be deposited at Green Waste sites or composted. Due to their invasiveness, Rambling dock and Bridal creeper, which is classified a Weed of National Significance, can take over a garden as well as neighbouring gardens. If residents think Rambling dock is growing in their garden please contact FoMM or the Parks Service through Canberra Connect. Please do not dump garden refusal in the nature reserve!
Rambling dock is a scrambling plant with a creeping habit or a low climber with short-lived stems reaching up to 3m long (occasionally up to 5m long). The stems sprout from long-lived underground tubers each spring and die back during winter as the weather gets cooler. The stems are prominently ribbed and green or reddish-green in colour and the alternately arranged leaves are distinctively arrow-shaped. The small flowers are inconspicuous, but the large cascading clusters of bright reddish-pink immature fruits are very distinctive. The mature fruits are papery, three-winged, and turn pale brown in colour. 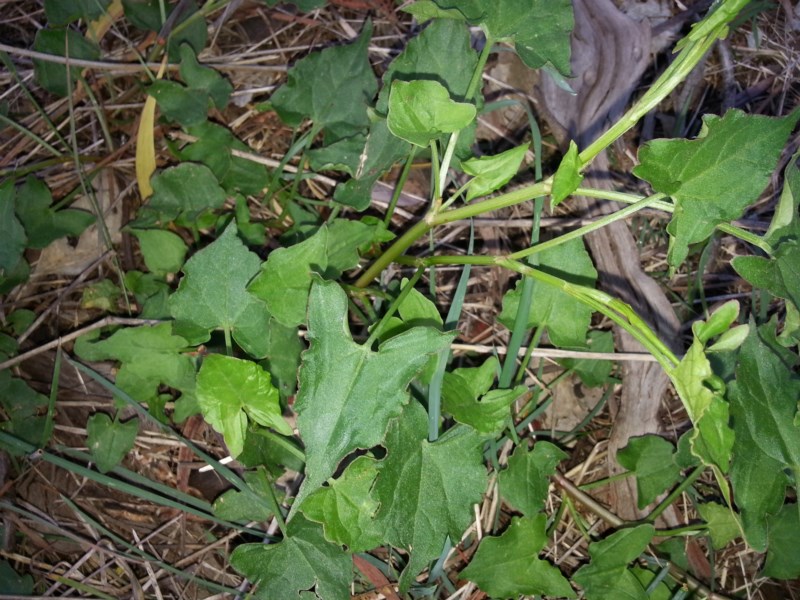 Biosecurity Alert for Coolatai Grass
The ACT Government Weeds Advisory Group has launched an initiative to alert key stakeholders, land managers and community groups to new and emerging weed risks for the ACT. Please find attached a biosecurity alert for Coolatai Grass, a highly invasive drought, fire and herbicide tolerant weed that can invade undisturbed natural ecosystems. Coolatai Grass has not been detected in the ACT but infestations are present to the north and south in NSW. Should you detect or suspect an incursion of Coolatai Grass in the ACT, please report sightings to Canberra Nature Map with a close up photograph. An automatic alert will be sent to the High Risk Invasive Plants Team. Read more.

Up Close – 29 November 2017 to 6 January 2018, 8.30am – 4.30pm
An exhibition of botanical paintings by Ruth Dodd at the Australian National Botanic Gardens Visitor Centre Gallery.

Joseph Banks’ Florilegium: Botanical Treasures from Cook’s First Voyage – Monday, 11 December 2017
This lecture and exhibition is free and open to the public. Joseph Banks accompanied Captain Cook on his first voyage around the world from 1768 to 1771, bringing back over 1,300 species that had never been seen or studied by Europeans. On his return, Banks commissioned over 700 superlative engravings between 1772 and 1784. Known collectively as Banks’ Florilegium, they are some of the most precise and exquisite examples of botanical illustration ever created. It was not until 1990 that a complete set in colour was issued in a boxed edition (limited to 100 copies) under the direction of the British Museum (Natural History). Read more.
Public lecture: 4–5pm R.N Robertson Lecture Theatre R.N. Robertson Building 46 Sullivans Creek Road Acton ACT 2601
Exhibition and drinks:5–6pm Hancock Library WK Hancock Building 122 Sullivans Creek Road Acton ACT 2601

SAVE THE DATE! 12th Australasian Plant Conservation Conference (APCC12) – 12th-16th November 2018, Canberra
The Australian Network for Plant Conservation (ANPC) is delighted to announce that APCC12 will be hosted by the Centre for Australian National Biodiversity Research (CANBR) at CSIRO, and will be held at CSIRO Discovery at the Black Mountain Science and Innovation Park. More details on APCC12 will be provided in the near future, so stay tuned here! ANPC members receive discounts on the conference registration fees. ANPC conferences and forums provide: