Happy new year to you all. Was one of your new year’s resolutions to do more for your local environment? If so, then we would love to see you at one or more of our working parties this year, held on the third Sunday of the month and every week at Fridays @ The Fair. Our numbers on the ground dropped considerably last year, so please help if you can. We need many hands to protect and restore Mt Majura’s threatened woodlands and the animals that live there, like the rare Rosenbergs Goanna mentioned below.
See you on the mountain
Jo Lynch
FoMM Secretary

Rare Rosenbergs Goanna sighted recently on Mt Majura!
A Rosenbergs Goanna was seen in late January on Mt Majura, and a couple of weeks before that tentative dig marks on a termite mound were spotted (see photo below), around the time when the females lay eggs. The digging is distinct from Echidna digging because it is higher above ground level and tends to be as tall as it is wide. More than one mound may receive shallow exploratory digs as in the photo. Eventually the female chooses one mound and makes a bigger hole with a chamber 70cm deep in the termite nest and at the bottom it would be 30cm x 10cm but at the entrance it is only about 10 x 12 cm.  However these are filled in as soon as she is able. Rosenbergs Goannas are listed as a threatened species in New South Wales, Victoria and South Australia and they are considered rare in the ACT, with just a handful of sightings including within Namadgi National Park in the far south. See also this fascinating ABC News story about the sighting of Rosenbergs Goannas on Mt Ainslie in November 2016. If you see either goannas or diggings, ACT Government ecologist Dr Don Fletcher would love to hear from you – just email us here. Please note: foxes, dogs and other monitors are the main threats to baby goannas, so please keep all dogs on leads! 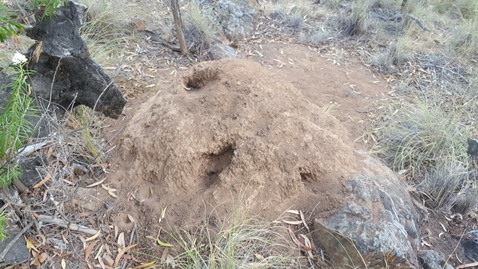 New weed alert: Ox-eye daisy
The ACT Parks and Conservation Service (PCS) are becoming increasingly concerned about the risk posed by a number of ‘new’ weeds that they are seeing more of. One of these is Ox-eye daisy (Leucanthemum vulgare). There have been few incursion sites so far including near Mt Clear campground in Southern ACT, Sutton Road and Mt Franklin Road, but they are now seeing it in many more areas. This is a highly invasive weed which is able to colonise intact native vegetation and farm pastures, so we do not want it established in the ACT. Obviously the more people on the lookout for this weed the better so it would be appreciated if you could keep your eye out for this one. Report any sightings to http://canberra.naturemapr.org or phone: 13 22 81. Click here for more information, photos and download the poster.

Public consultation on the Eastern Grey Kangaroo: Draft Controlled Native Species Management Plan
The ACT Conservator of Flora and Fauna has released this draft plan for public comment. It does not propose any changes to the goals or overall approach to the management of kangaroos in the ACT as described in the 2010 ACT Kangaroo Management Plan. The timing of the kangaroo culling season, and implementation requirements for accreditation of shooters are also not proposed to change. The draft plan provides updated information on the local research on the impacts of kangaroo grazing on biodiversity conducted since 2010 and amends policies to make reference to the current codes of practice and the Nature Conservation Act 2014. The draft plan is available for public comment here until 24 March 2017.

Changes to ACT Pest Animals Declaration
At the end of last year some changes were made to the Pest Plants and Animals Act 2005, s 16 (Declaration of pest animal). Click here for more information on these changes. An important point to note is that only an authorised officer can undertake compliance. Most of the Ranger positions in PCS have the authority to carry out compliance. So this means that members of the public, such as ParkCare and Landcare volunteers, who see a breach of the Act, would be best to contact Access Canberra on 13 22 81 to report it rather than getting involved themselves. Here is a summary of the changes to the Pest Animals Declaration:

2016 edition of ‘Scribbly Gum’ is now available
Published by the ACT Parks and Conservation Service, this publication highlights the work of many ParkCare and Landcare groups in the ACT.

Latest news on the ParkCare positions in the Parks and Conservation Service
The Community and Visitor Programs team has recently finalised recruitment for two positions: Alison McLeod has just started as the Community Programs Coordinator (previously known as the ParkCare and Volunteer Coordinator) and Philip Selmes is now the ParkCare Support Officer (better known as the ParkCare Ranger who is responsible for supporting ParkCare groups with initiating, planning and implementing on-ground community and conservation projects). Alison has experience in coordinating NRM and community projects in rural ACT and NSW. Phil’s previous experience working with ParkCare and his long-term personal commitment to Landcare will put him in a good position to continue the great work undertaken by Craig Wainwright in this role.

ACT Conservation Council – Save the dates