Welcome to the June 2016 edition of the FoMM newsletter. Ten enthusiastic volunteers turned out on 24 April for a delightful late afternoon stroll up Hancocks Road from Kellaway St to collect a large bag of Cassinia quinquefaria seeds. These were then delivered to Greening Australia to be used for both direct seeding and propagating seedlings for planting. After initial concern that the seeds might not be viable due to the dry conditions, FoMM consulting botanist Isobel Crawford checked the seeds afterwards and found they were fortunately well developed. May they live long and prosper.
See you on the mountain.
Jo Lynch
FoMM Secretary 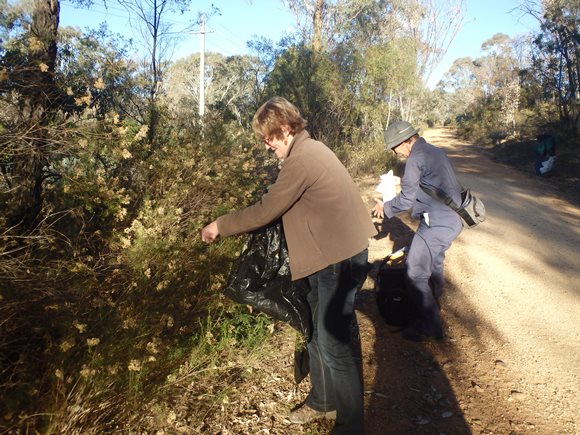 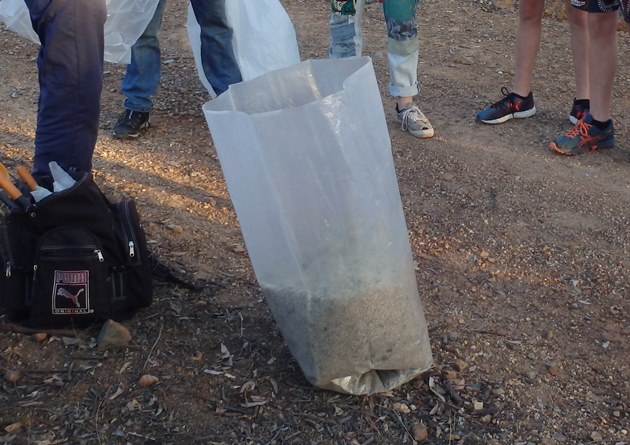 Working Party @ The Fair – Sunday 19 June, 1pm – 4pm
Give a hand and help transform Mount Majura’s weedy woodland at The Fair into a grassy woodland. Enjoy the view of little woodland birds foraging among planted trees and shrubs and learn about our work to reclaim grassy woodland in the area. Activities will include removing tree guards outgrown by their inhabitants, placing debris of woody weeds around young plants to protect them from grazing damage, spreading wood chip mulch to reduce erosion of bare soil that has resulted from overgrazing, and hand-weeding Paterson’s Curse that competes with native plants for light, nutrients and water. The organisers would appreciate if you could arrive on time for an introduction; give as much of your time as you want.
Meet: Nature park entrance Tay / Ian Nicol Streets, The Fair, North Watson
Bring: Sun protection, sturdy shoes; tools and afternoon tea will be provided.
Inquiries: to this email
Click here for more information 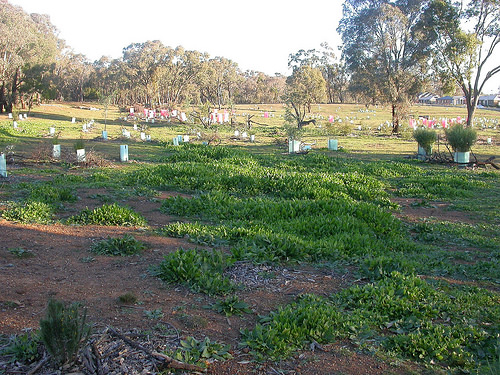 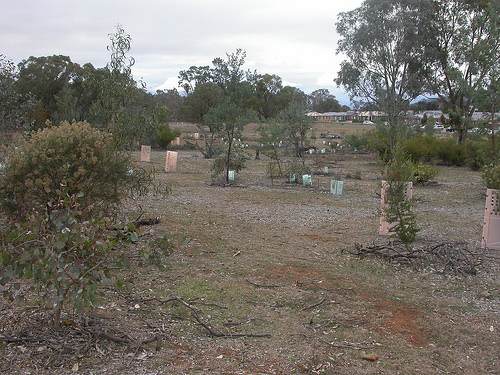 View towards the southwest at The Fair – left, May 2014 showing the lush green rosettes of Paterson’s Curse and right, May 2016 two years and many hundreds of volunteer hours later. (W. Pix)

Significant finding of Nardoo (Marsilea mutica), a water fern, in the Mt Majura nature reserve
This is the only known site where naturally growing Nardoo is recorded in the ACT – the last record was in 1972 at the mouth of Sullivans Creek. FoMM volunteer Waltraud registered the finding in January 2016 on Canberra Nature Map here, but had to wait until the sporocarps recently appeared to help with the final identification here. Sporocarps are the tissues that bears the spores, and are the feature used to identify the species within the Marsilea genus. Marsilea mutica has globe-shaped (globolus) sporocarps which sets this species apart from the other 4 Marsilea species that naturally occur in NSW. 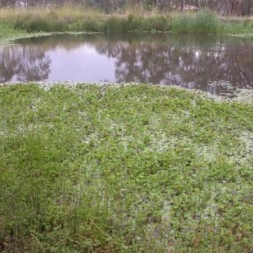 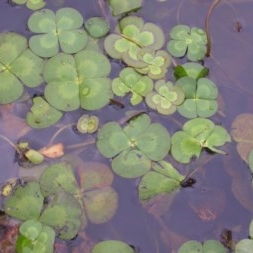 Life saver or life taker? Edited version of fascinating ABC Science article ‘Nardoo, the desert fern‘ by Abbie Thomas
In August 1860, Robert O’Hara Burke led an expedition of men, including William John Wills as surveyor, out of Melbourne. Their aim was to be the first people to cross the continent from south to north. Burke and Wills planned to open up a route that would connect the newly invented telegraph line to Europe, via Java. They wanted to investigate a possible route for a railway line and discover if there was an inland sea. Three months after setting out, Burke and Wills set up a base camp in Coopers Creek and were running out of food. They were offered Nardoo by the local Aborigines and gladly accepted it. It satisfied their appetite and soon after, they began to prepare their own Nardoo, grinding it up and mixing it with water to make a thin paste, as they had seen the local people do. Despite eating up to “four or five pounds a day between us”, as Wills notes in his journal, the two explorers grew weaker and thinner and developed symptoms such as shaking legs and a gradually slowing pulse. On Wednesday, June 12, 1861 Wills wrote… “King out collecting nardoo. Mr Bourke and I at home, pounding and cleaning. I still feel myself, if anything, weaker in the legs, although the nardoo appears to be more thoroughly digested.”

Wills couldn’t understand why he seemed to be starving, despite eating so much nardoo. What he didn’t know was that nardoo contains an enzyme called thiaminase that breaks down thiamine (Vitamin B1), making it unavailable to the body. Thiamine, although needed in only tiny amounts, is essential for energy metabolism, nerve and brain function. We need thiamine to make ATP, a complex molecule that provides energy for cells to do work. People with low thiamine levels also produce too much cholinesterase, an enzyme that regulates nerve impulses that, when disrupted, can interfere with the peripheral nervous system. Some other plants also contain thiaminase, such as horsetails and bracken fern, and some types of seafood. Nardoo has 100 times more of this enzyme than bracken. Typical symptoms of thiamine deficiency — a disease known as Beri-Beri — are tremors of the hands, feet and legs, an enlarged heart and weakness. As your body can’t use the food you eat to provide energy to its cells, you slowly starve to death, even if you have enough food.
But there may be worse ways to go. As Wills wrote four days before he died, “Starvation on nardoo is by no means very unpleasant, but for the weakness one feels, and the utter inability to move oneself, for as far as the appetite is concerned, it gives me the greatest satisfaction.” The tragedy of this story is that Nardoo could have saved Burke and Wills. They failed to add the extra step in the preparation of Nardoo that indigenous people followed. Aboriginal people would roast the spore cases (sporocarps), before grinding them. This simple step of adding heat to the process completely breaks down the thiaminase, making it harmless. Nardoo was a such an important food source to Aboriginal people that it was processed in large amounts with so-called ‘Nardoo Mills’ — sets of flat grinding stones scattered around the edges of water courses such as the Willandra Lakes. Perhaps if Burke and Wills had watched the locals more carefully, they might have survived to become the first white men to cross the continent from south to north. Today, cattle and sheep on grazing properties in inland Australia will succumb to Nardoo if they eat enough of it when the sporocarps are present. Although it is fatal to mammals, Nardoo is an important flood-time food for waterfowl.
FoMM Coordinator Max Pouwer

Frogwatch News
Last year as part of a Climate Change Project, weekly frog surveys were undertaken to monitor changes in the onset of frog calls in a warming climate. Ironically, 2015 had the coldest winter months in 20 years. Therefore they are repeating the experiment this year, starting now.
Mt Majura is one of the five locations, which are all linked to historic data about frog calling behaviour in the ACT. They still need volunteers for two of the Mt Majura sites: Mt Majura Dam, bottom, via McKenzie St and Mt Majura Dam, top. Please contact Frogwatch if you can help out or complete this Mt Majura Frogwatch doodle poll. This can be occasional monitoring, adopting a site, 2 months or the entire period. Doing the weekly monitoring is a great way to learn the different frog calls – starting with one or two species over the next two months gradually more species – generally one by one- will join the ever growing chorus, which peaks in spring with up to 8 species calling simultaneously.

Other items of interest:

Temperate Grassland of the South Eastern Highlands, a critically endangered ecological community
The previously listed Natural Temperate Grassland of the Southern Tablelands of NSW and the ACT has been replaced by a new listing and definition, which has extended its distribution and range, altitude, habitat and threatened status, under the Commonwealth Environment Protection and Biodiversity Conservation Act (EPBC). Distribution ranges from Orange and beyond in the north to East Gippsland in Victoria, west to beyond Tumut and east to the Dividing Range, including many significant sites in the ACT. For further details see the Conservation Council’s blog prepared by Sarah Sharp, ecologist and founder of Friends of Grasslands.

RegenTV video platform is set to take off over the next 3 years
With funding from the NSW Environmental Trust, the Australian Association of Bush Regenerators (AABR) is developing a video based educational resource. RegenTV will officially launch at AABR’s 30th anniversary in Sydney in July, but it’s already taking shape. They have recently added two field day videos and five conference presentations. Have a look here at its interim home, and check in often to watch it grow.

Orchids: The Masters Of Lying, Cheating & Stealing
We highly recommend watching this new YouTube video on what makes orchids so unique, developed by the Orchid Specialist Group of the IUCN’s Species Survival Commission. It even refers to Australians building fences to protect threatened spider orchids from grazing rabbits and kangaroos, just like we do on Mt Majura.