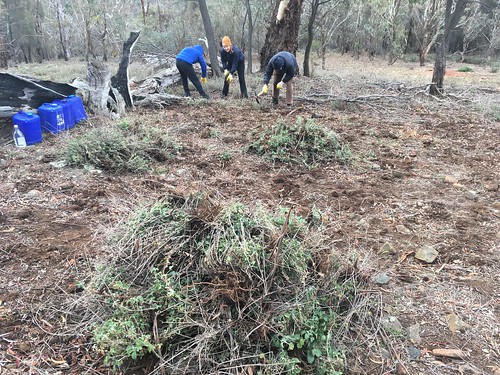 Weeding horehound at the old stock camp from left Yuwei, Isabel and Peter

On a freezing cold, windy Sunday afternoon, a small group of five brave and cheerful volunteers followed the Blue Metal Road past the dams and reservoir, up to the old sheep camp on the ridge to the south.

They aimed to spend the afternoon hand weeding a large patch of Horehound infesting the area, and enjoying the sweeping views East into Majura valley, and West across Canberra to the Mountains. They heroically massacred, pulled, dug and piled up mounds of Horehound, to release small native ground covers from being smothered by this invasive weed.

This was satisfying and warming work, but as temperatures dropped and winds became stronger, we were too chilled to continue. At 6oC, it was the coldest winter day so far this year. After 1.5 hours, the group wisely retired to a warm house, hot chocolate and a chat.