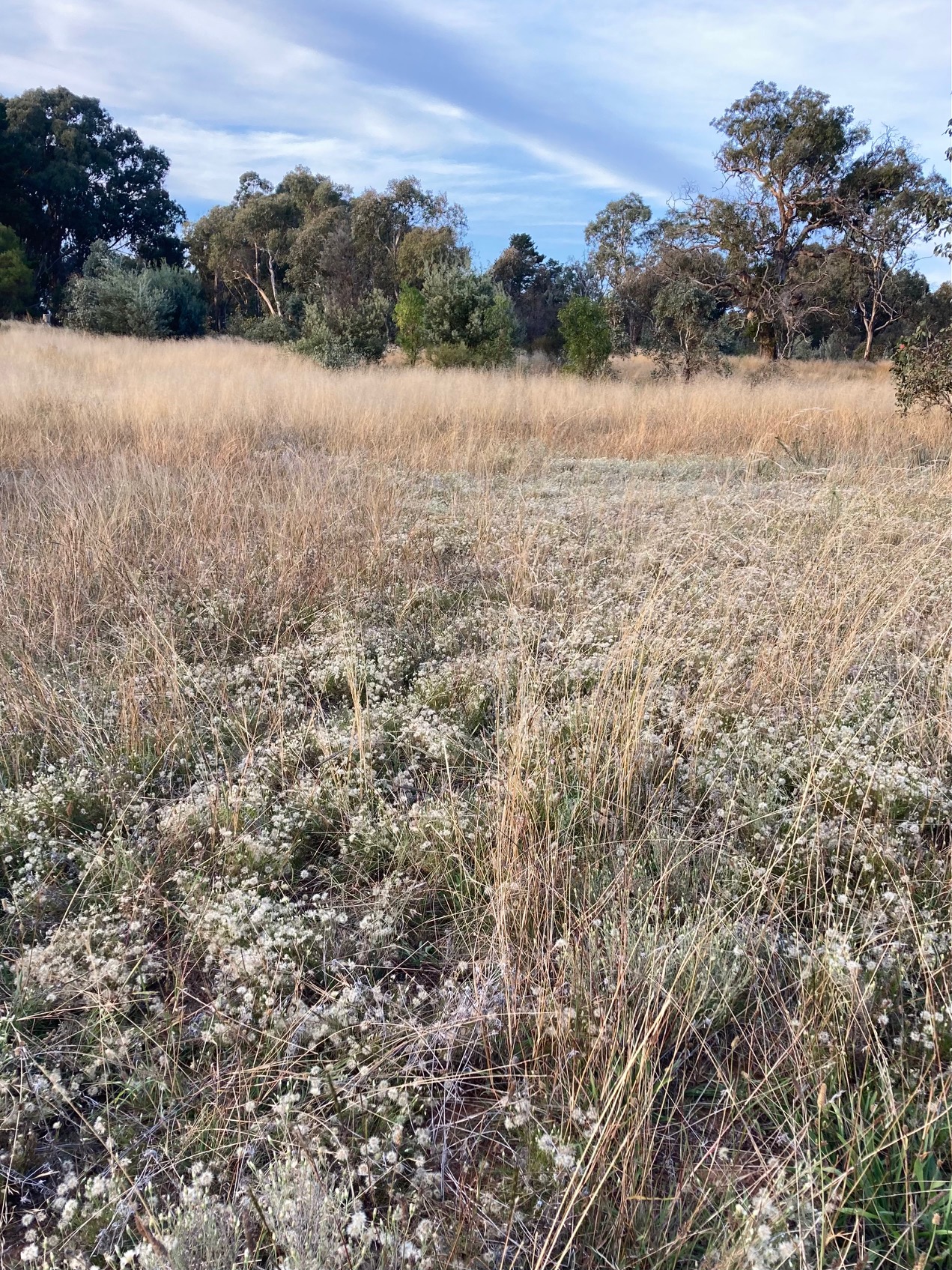 The Fair project in March 2021. View to the southeast from the fence with the residential estate of which we took the name for our project.

View this video scan of the transformed Fair taken in March 2021.

In 2012, Friends of Mount Majura (FoMM) began on-ground work to improve a 10 ha patch of degraded grassy woodland in the Mt Majura nature reserve east of the residential estate The Fair in North Watson.

We named our project The Fair and began our work in the south of the project site; click on this map to view the location.

Past land use such as farming, horse holding, cross country horse riding, and car racing severely modified and damaged the grassy woodland and adjoining open forest.

Local trees had been cleared and invasive species planted such as Hawthorn, Black Locust, English Elm, and Firethorn. There were sites with heavily compacted and eroding soil and the herbal ground cover consisted mainly of introduced species such as Paterson’s Curse, Serrated Tussock, St John Wort, various thistles, Mullein, Buchan Weed, and more. 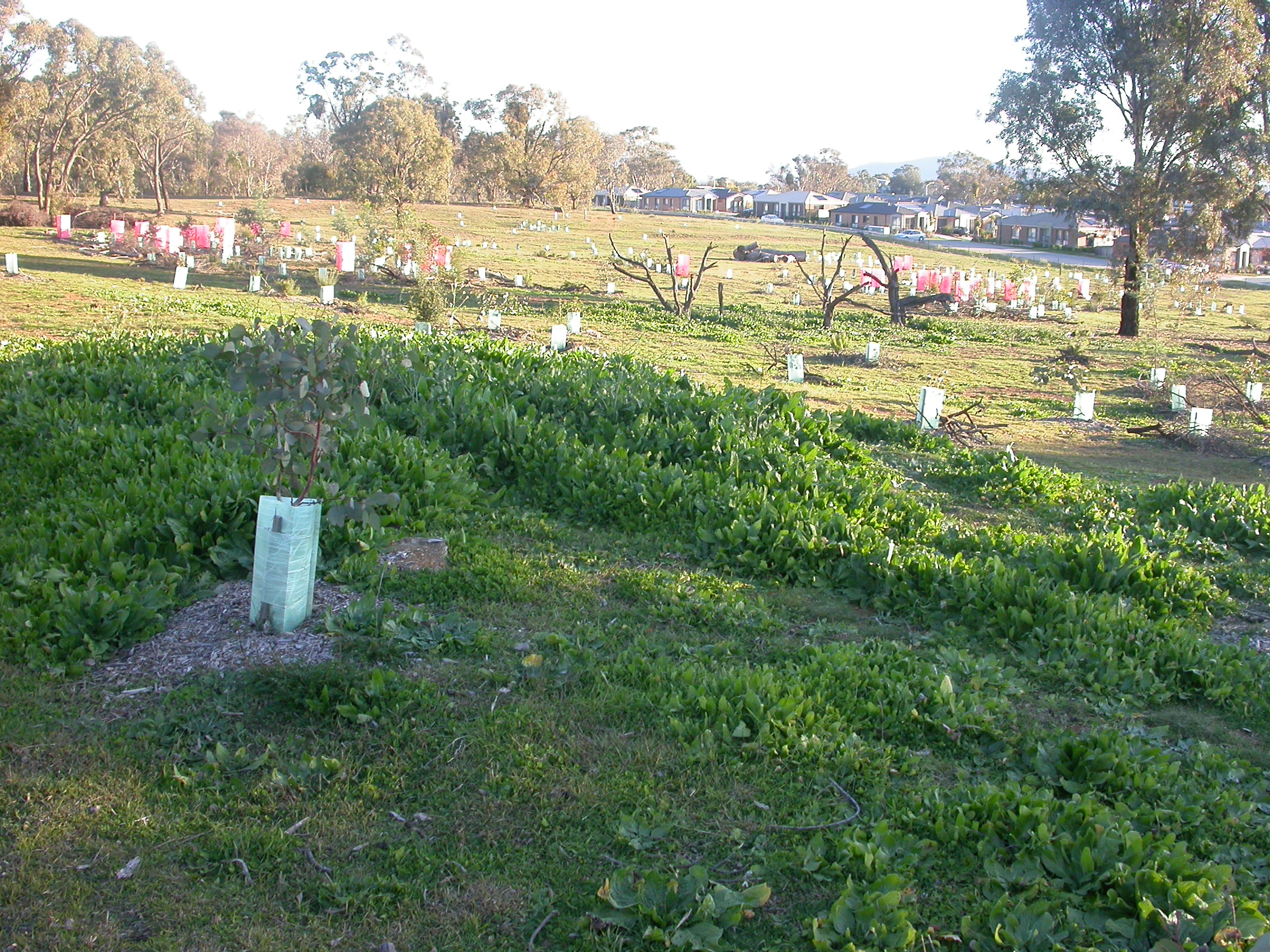 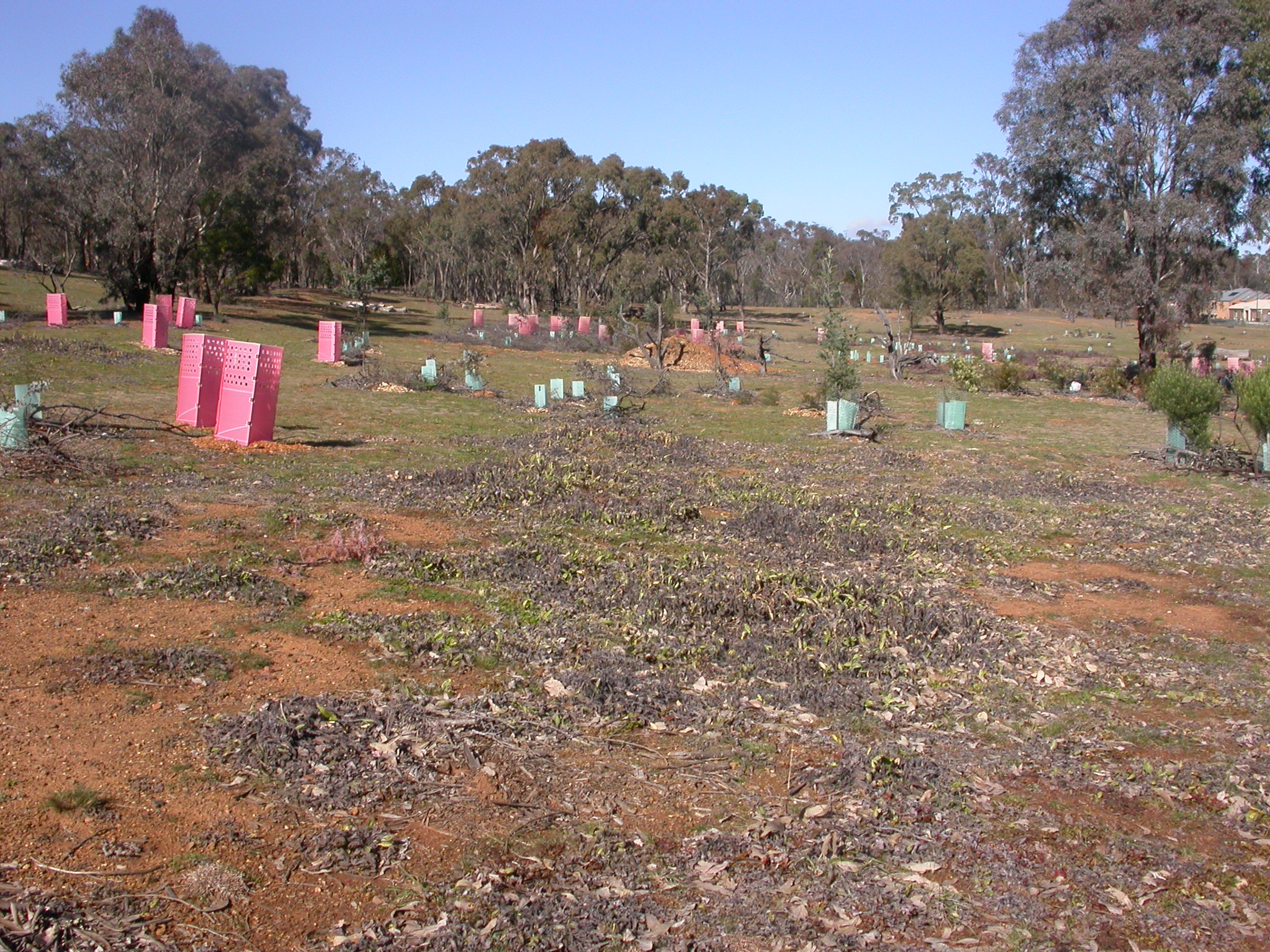 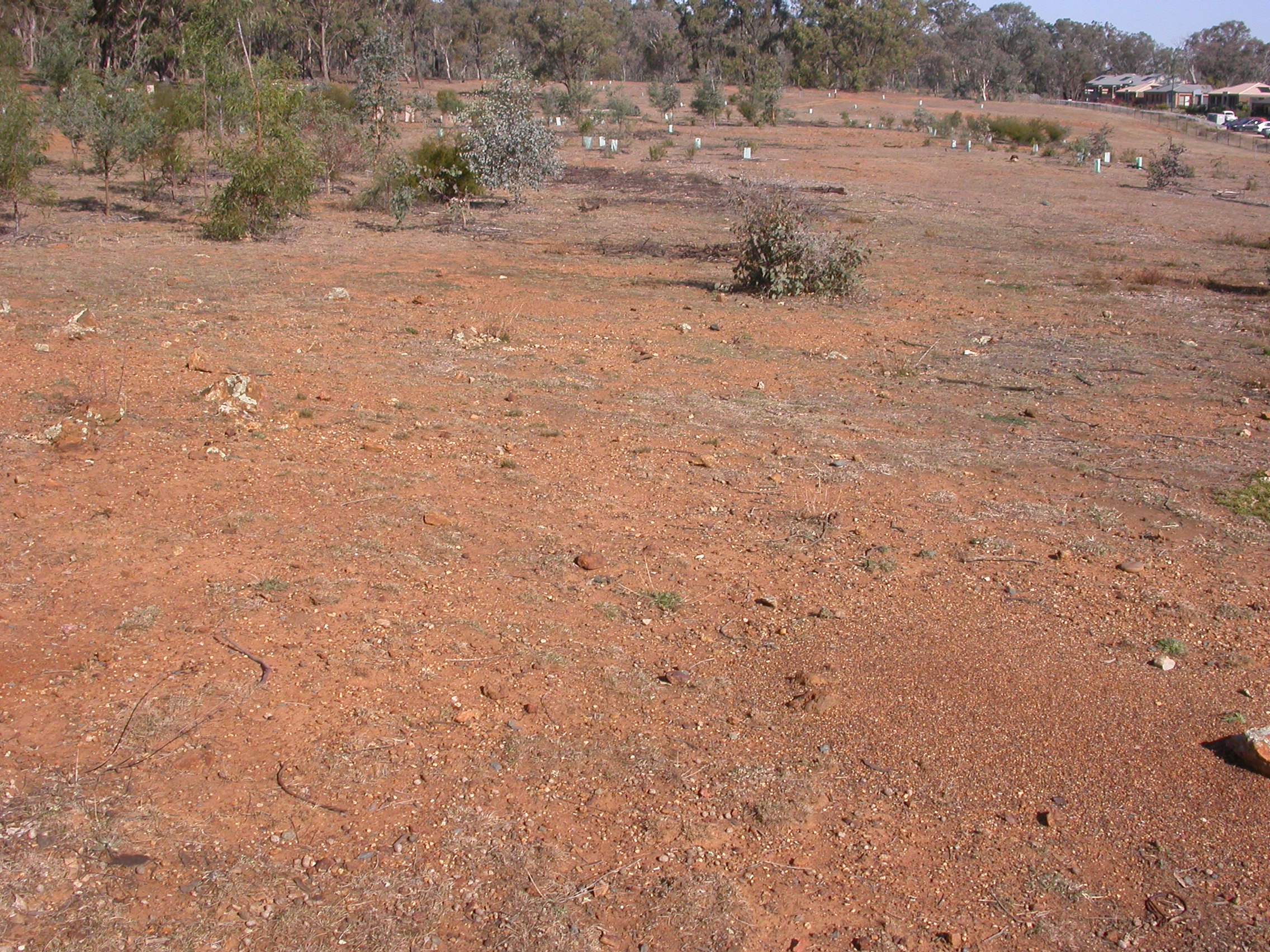 Compacted & denuded. View of the lower part of The Fair towards the south before we began loosening the soil, excessive mulching, and direct seeding of native forb and grass seeds.

The biggest challenge however was – and still is – the overabundance of herbaceous weeds. Paterson’s Curse for example formed dense monocultures at sites completely smothering native vegetation. FoMM used an integrated management approach to tackle the problem: we initially sprayed herbaceous weeds with selective herbicides, hand-weeded and removed scattered fruiting plants, direct-seeded and planted native grasses and other herbs to establish a native ground cover to help suppress the germination and regrowth of weeds, and excessively mulched with woodchips to provide a slow-release carbon source. We think the microbial decomposition of wood chips reduces the nutrients released into the soil from past management thus creating a soil environment that is less beneficial for the growth of nutrient-loving herbs like Paterson’s Curse.

The Fair is a dynamic system driven by seasonal change, herbivore (over) grazing, loss of native and introduction of new species, and a vast soil seed bank which accumulated over decades  – perhaps a century – from uncontrolled weeds. However, the hard work of volunteers over the past ten years has tipped the balance towards a diverse grassy woodland that is attractive for local wildlife and human visitors alike.

The two sets of photographs below present a visual summary of the work progress in the northern part of the project site over consecutive years. I took the photographs around the same time of the year from roughly the same two viewpoints close to the big conifer marked on the map. The first set shows the view to the northwest towards a large drainage line that borders The Fair project in the north; the lower part of the big conifer is visible on the right-hand side of the photographs. Comments on the right-hand side of the first set refer to the main conservation actions that volunteers carried out. The second set shows the view uphill to the northeast with a fallen tree in the background as a reference; the tree has almost disappeared from the view in May 2021.

Photographs and video by me, the author, 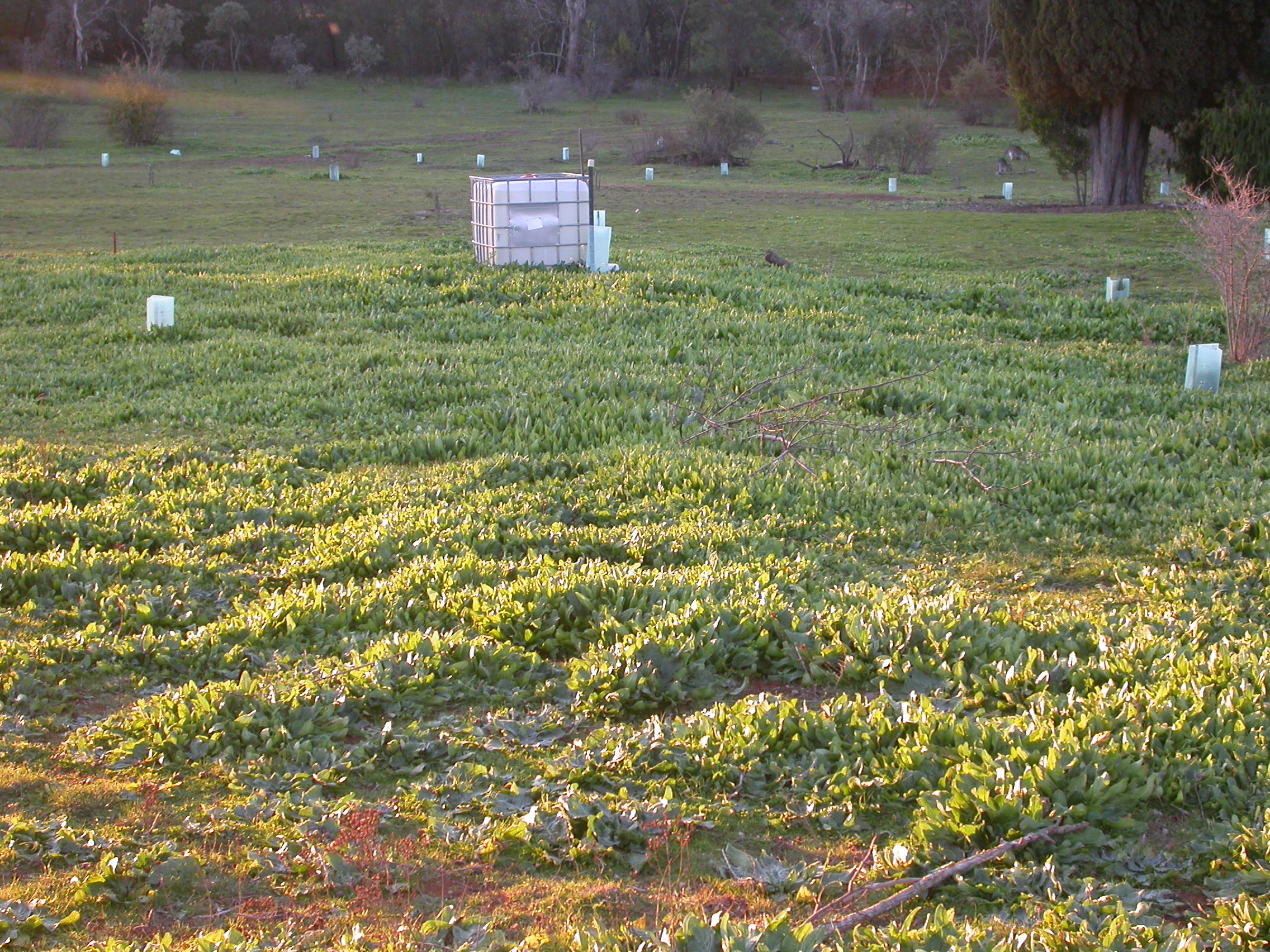 May 2014. A carpet of Paterson’s Curse; at this stage, woody weeds (African Boxthorn, Firethorn, Hawthorn, Sweet Briar, etc) are already removed with the exception of some specimens – visible in the background – that had been left to provide bird habitat until new-planted native shrubs have established. 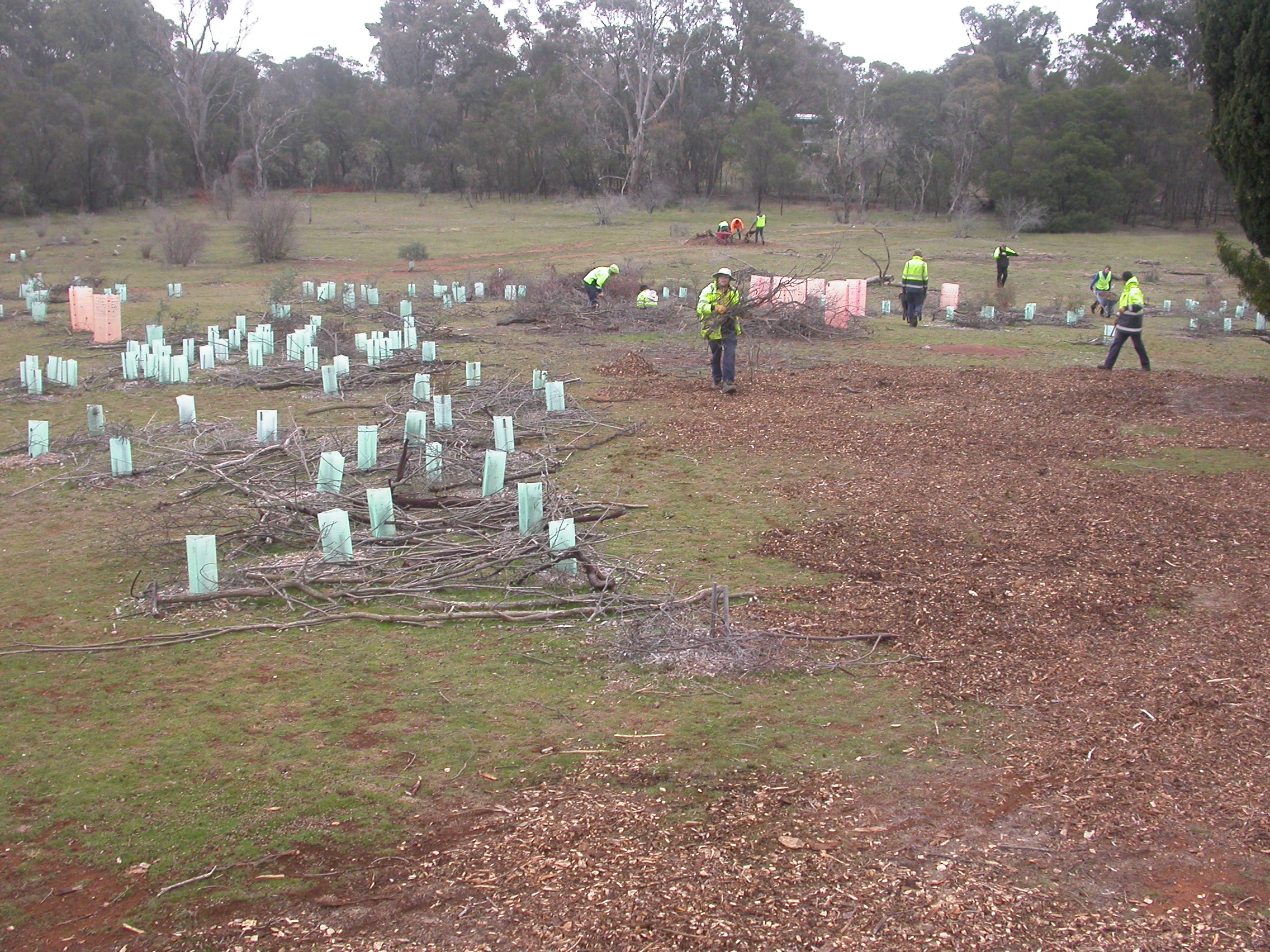 June 2015. After several rounds of spraying herbaceous weeds with selective herbicide, we spread truckloads of mulch and direct-seeded native grass; first mass plantings in this northern part of the project area. 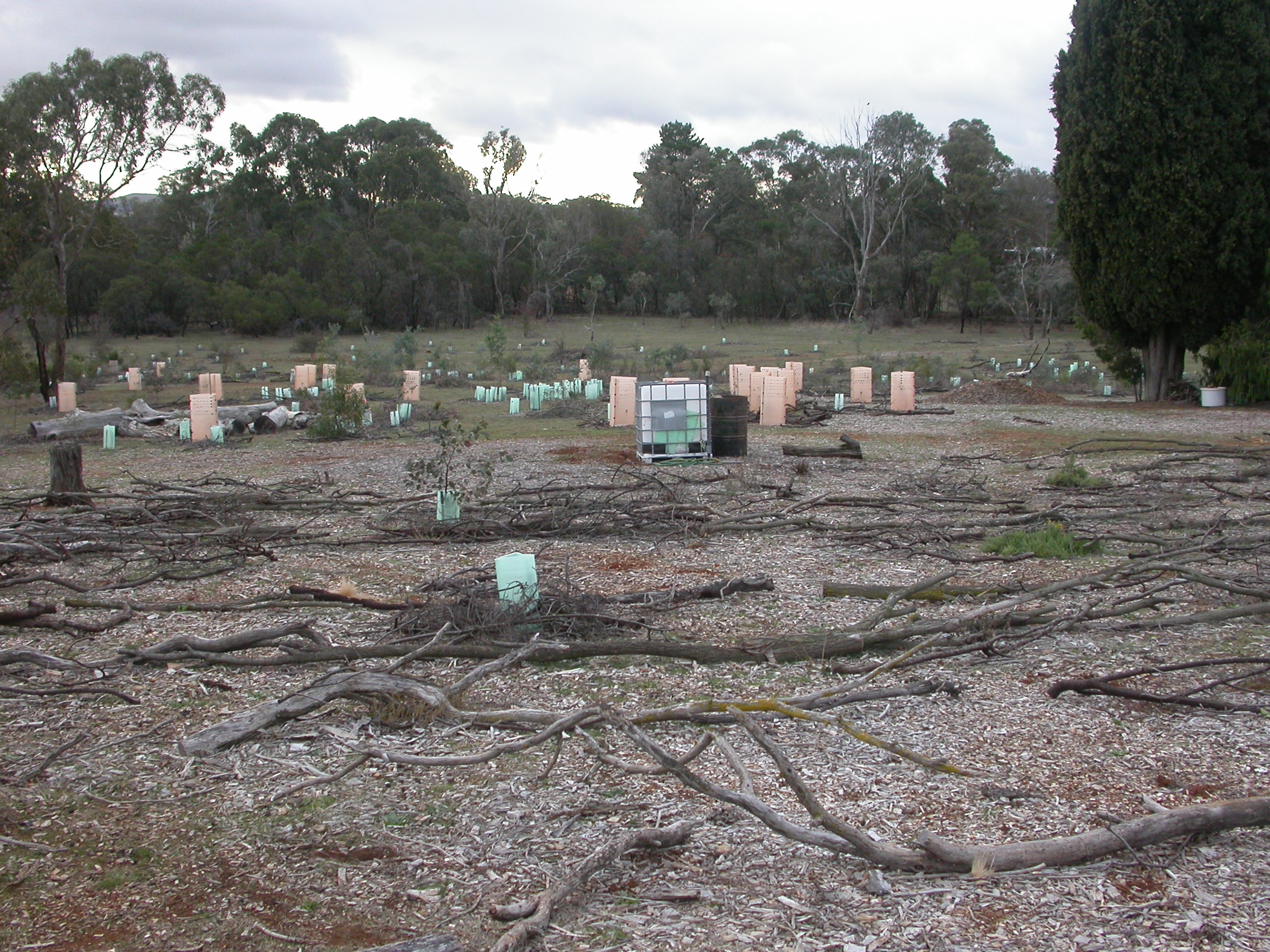 May 2016. More mulch including coarse debris was added to hold soil and broadcasted grass seeds and to distract large herbivores from grazing new plantings; we kept direct seeding and kangaroos kept eating… 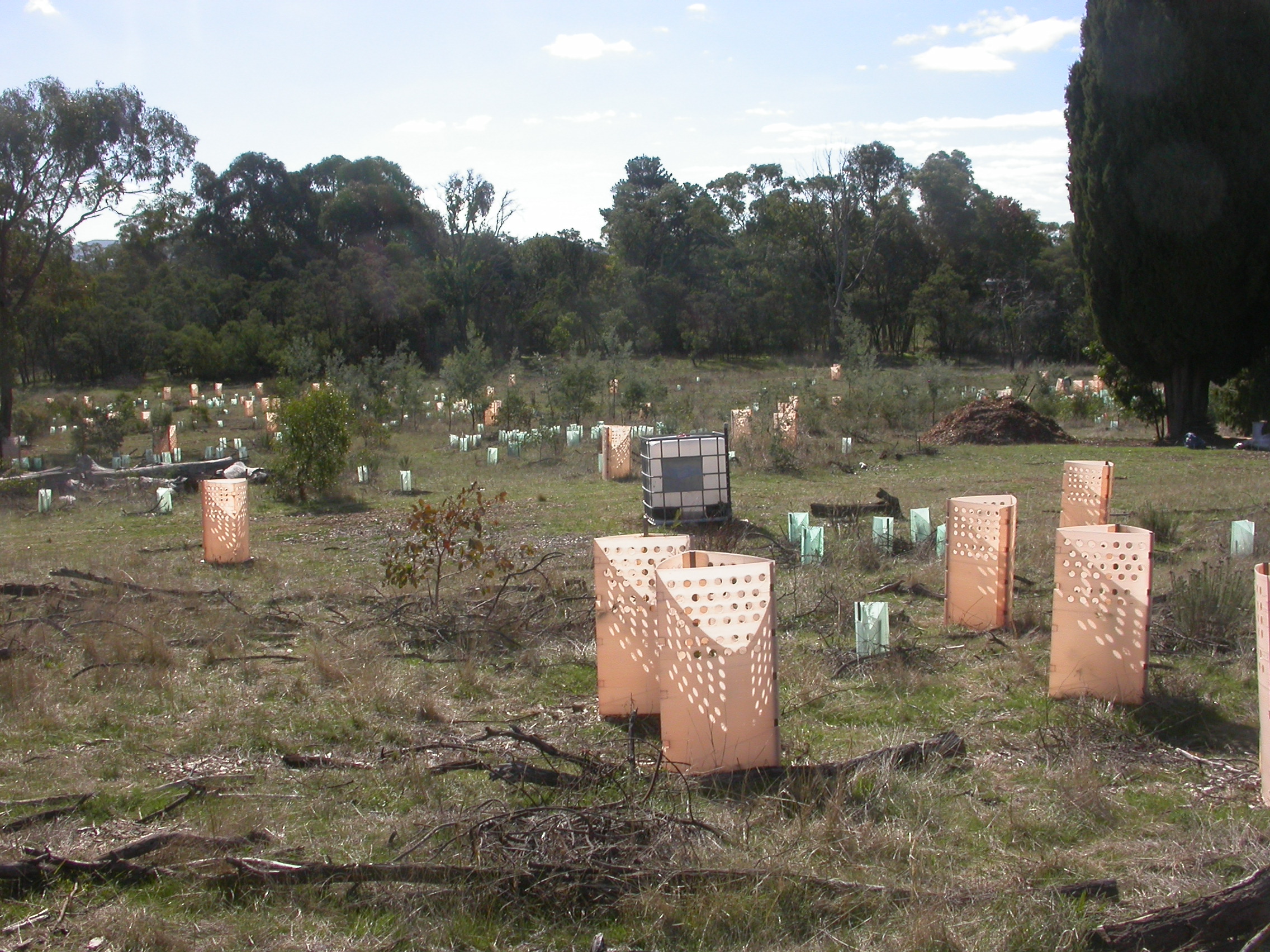 April 2017. Native grass and forbs began to establish; most of the wood chips have decomposed and are barely visible; more shrubs and trees were planted along the drainage line in the north to replace the woody weeds we removed from the project site and immediate surrounds; the planting rate was to achieve an approximate 1:1 ratio of new plants to removed weeds. 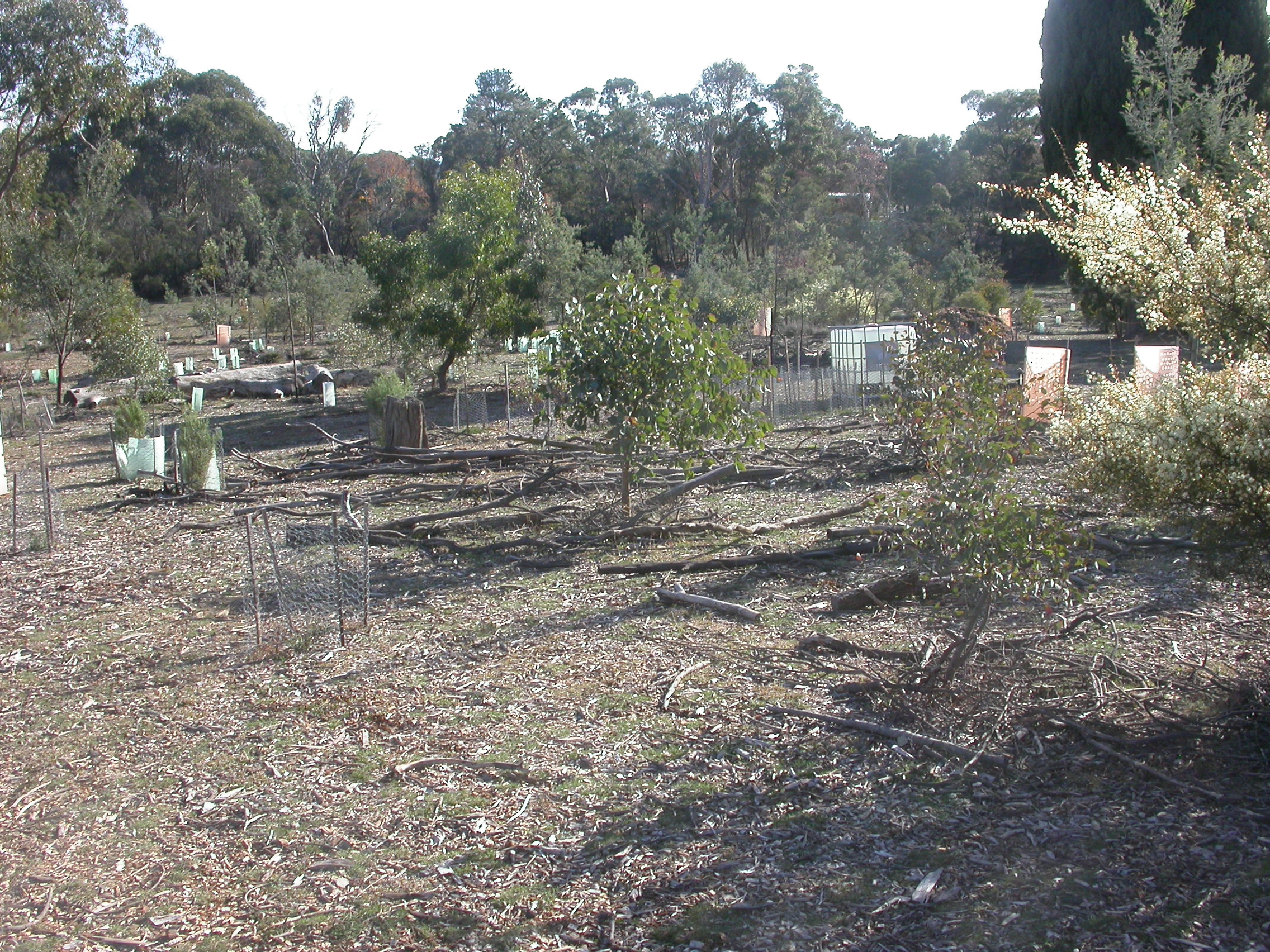 May 2019. Shrub and tree plantings established; overgrazing during the drought reduced direct-seeded ground cover; when La Nina brought rain in February 2020 and with little competition, herbaceous weeds germinated from the present soil seed bank; we sprayed rosettes again and manually removed fruiting weeds; we spread more wood chips to reduce evaporation and soil erosion and to drawdown nutrients; supplementary direct-seeding of colonizers such as Speargrass. 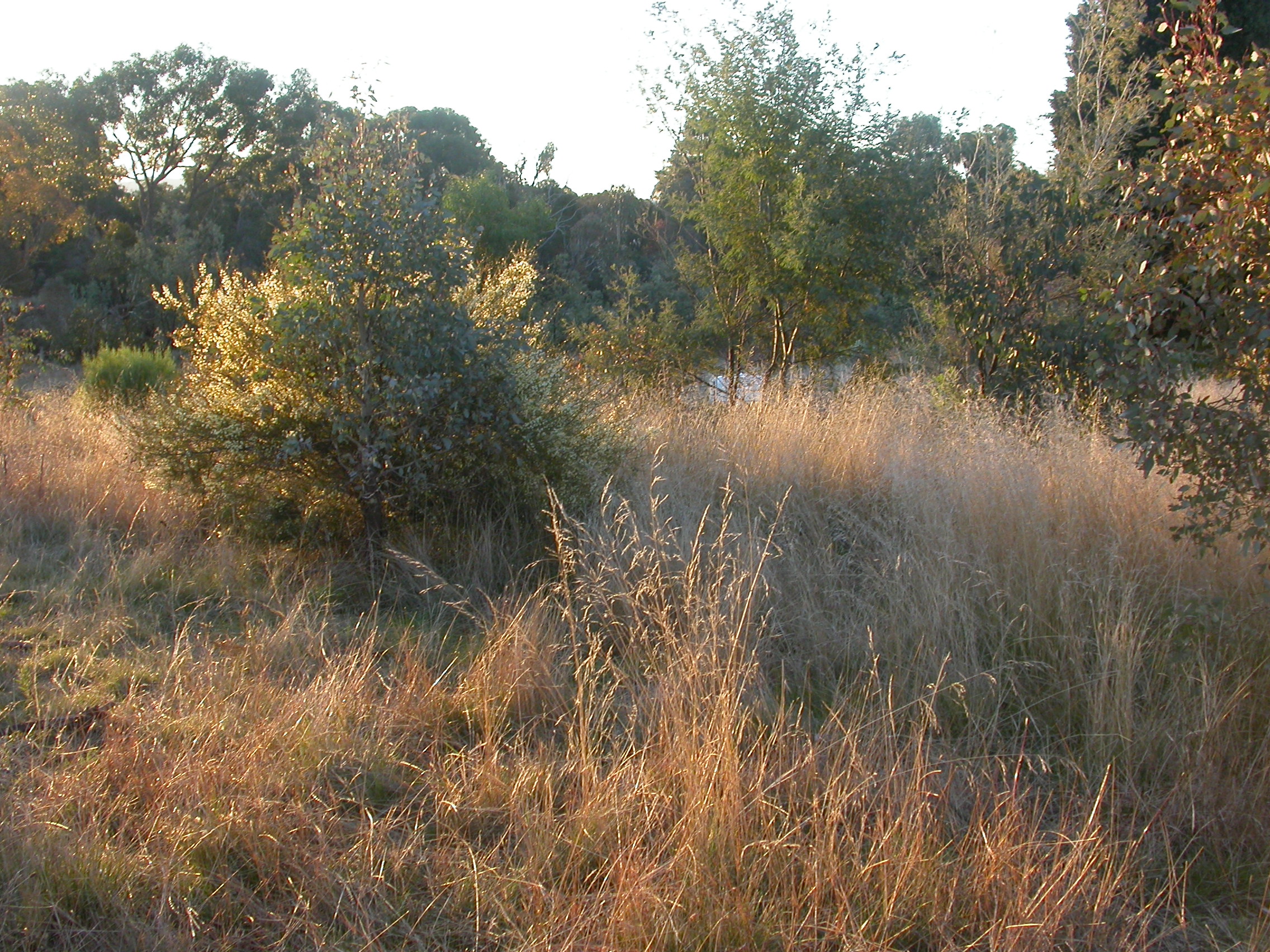 See more of the floristic biodiversity and the transformed landscape in our Fair album, with photos taken in Summer 2020/21. 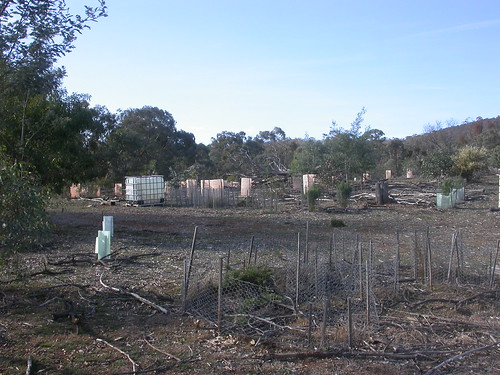 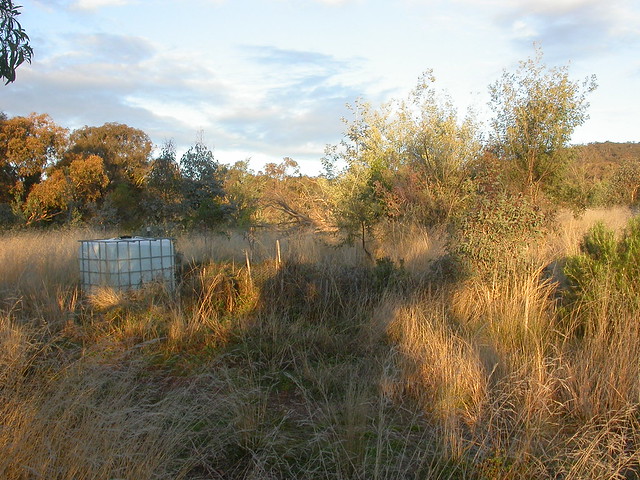 Panorama of The Fair project site in March 2021. Several photos taken at the west boundary fence of The Fair with a view to the east were combined to create this panorama – meanwhile, I learned to use the panorama function of my new mobile phone 🙂