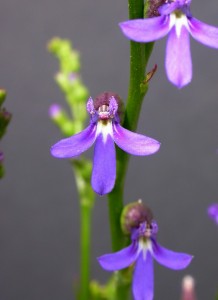 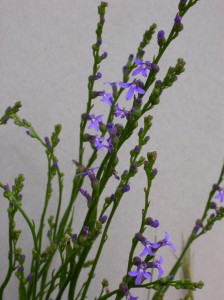 The latest addition to the Mount Majura species list is the uncommon Lobelia gibbosa var. gibbosa. This is the only species of the genus Lobelia recorded in the ACT. The species was discovered end of November 2010 at two locations  growing in open forest on rocky soil at the west slope of Mt Majura. The erect herb is about 40 cm tall and has many flowers borne on a central axis. The flowers are of a stunning deep blue colour and irregular shaped with three broad and spreading frontal petals and two reduced back petals.