Tornado in the Majura Pines 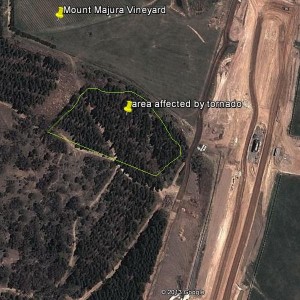 On Thursday 21stNovember 2013 a tornado touched down on Mount Majura.  Those of us living in Hackett are very fortunate that the touchdown occurred on the eastern slopes.  That Thursday night there was a huge and powerful storm with strong winds, hail and lots of rain.  The maximum gust registered at the airport was 93 km/hr and by 9am the next morning over 26mm of rain had been recorded there.  But the scene that greeted me when I went for my regular run through the Majura Pine Plantation told a much scarier story.

I have lived in the southern states of the USA so perhaps I am more alert to the dangers of tornadoes than most Canberrans.  The tornado forms inside a large thunder cloud and then, if conditions are appropriate, the funnel cloud descends from the cloud and if this comes right down to the ground you have a full blown tornado.  The effects are very local, this is why you can see a scene from an American surburban street with one house demolished, the ones on either side with serious damage and all the others unscathed. As the funnel descends it can snap off trees high above the ground.

Today I finally took my phone over to the Pine Plantation to get some photos of the area as I think we should all be more aware of the potential dangers of tornadoes and should be realistic that they could occur on the leafy streets of Canberra.  Entering the Pine Plantation there were quite a few fallen trees and that is not that unusual.  But coming around the northern end of the pines at the top of the hill there was an area with lots of trees down and quite a few snapped off half way up.  I headed on down the track between the pines and vines to the bottom corner where I saw a solitary tree snapped off.  Turning the corner to head down towards where the new road is being built I could hardly believe my eyes – at first glance I thought the loggers had come back and cut down every tree in the bottom corner leaving just a few around the edge.  Then I saw that none of them had been cut, they had all been torn up by the roots.  This means that in my photos, taken two months after the event, most of the trees are still green as they were left with one root in the ground.  To try and convey the impression of the scene I have taken 4 photos which give you a panorama from left to right across the area.