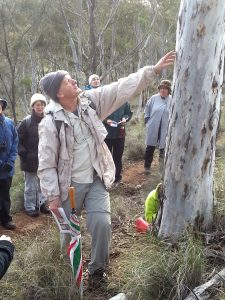 Report by Thomas Brereton with some closing remarks by Max Pouwer.

On Sunday 24 July a group of intrepid aspiring botanists braved a looming hailstorm to follow Michael Doherty through the grassy woodlands and open forests of Mt Majura. Luckily the weather cleared as we set out into the Blakely’s Red Gum/ Yellow Box (Eucalyptus blakelyi/ E. melliodora) woodlands encircling the base of the mountain.

In addition to identifying these dominant eucalypts, we learned the characteristic flakey bark of the Apple Box (E. bridgesiana), the large sickle shaped phyllodes of the Hickory Wattle (Acacia implexa) and the delicate foliage of the climbing Small Leaved Clematis (Clematis leptophylla). 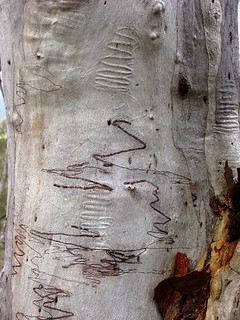 Crossing the powerline trail and climbing up to the stony western face of the mountain, the dominant eucalypt species shifted to the Scribbly Gum (E. rossi), on which Michael pointed out the distinctive dark scribbles left by burrowing larvae, and the flesh-like pressure ridges in the folds under the branches. 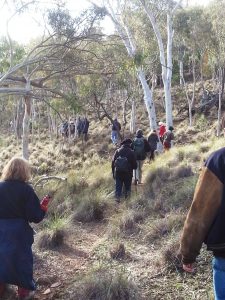 As we walked northwards, Michael demonstrated the dusty bark of the Brittle Gum (E. mannifera), to differentiate it from the similar adjacent scribbly gums. We passed a stand of Black Cypress Pine (Callitris endlicheri), which Michael explained were unable to recover from fire unlike the surrounding eucalypts. The cypresses were distinguished from the nearby superficially similar parasitic Cherry Ballarts (Exocarpus cupressiformis) by their woody cones and the distinctive pine like odour of the foliage. 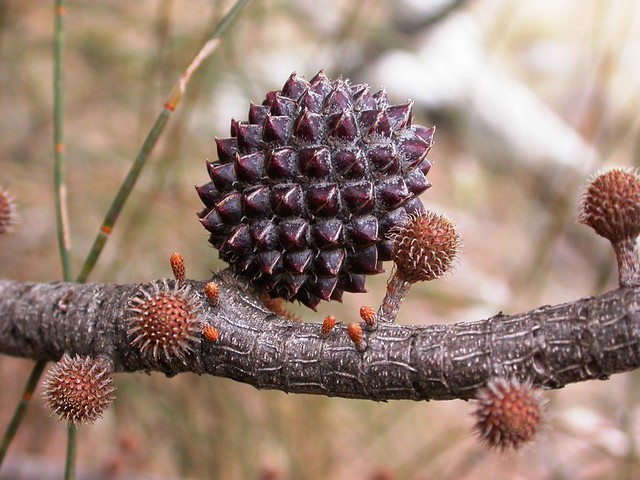 Reaching a creek gully, we climbed up a damp gully through a stand of Bundy Box (E. goniocalyx), which was difficult to distinguish from Apple Box without examining the juvenile leaves, buds or fruit. After passing through forest dominated by the needle leaved Drooping Sheoak (Allocasuarina verticillata), we climbed up the main ridge of the mountain to reach a stand of Kurrajong trees (Brachychiton populneus) planted in 1920. 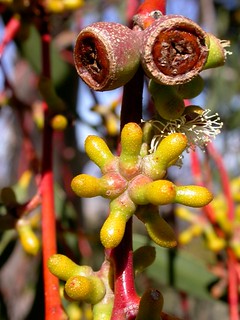 Near the summit, Michael pointed out the final eucalypt species of our walk, the smooth barked Snow Gum (E. pauciflora), restricted to only the highest areas of the mountain. With sunset approaching, we enjoyed the view over the Canberra plains under the gathering clouds while wandering down the mountain.

Despite the challenging weather including a brief hail fall and temperatures hovering around 5 C, we had a record turnout of 33 interested people, including a number of young people. This was great to see! 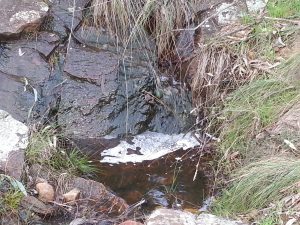 A notable feature was the free flowing water streams which we have not seen a lot of in the normally dryer forests and woodlands of Mt Majura.

The exceptional rainfall we have had in this winter season during June and July has recharged the frequently dry creek beds and should bode well for the spring flowering season this year.

Judging by the chorus of Frog song in evidence, our little Amphibian friends should also do well this winter and spring, capitalising on the extra rain.