With a mere 45 other participants, I joined lively young ANU myrmecologist, Dr. Ajay Narendra, for a glimpse into the fascinating world of ants – one of the most dominant animals on the planet.  Waltraud Pix had organised the adventure, and had had an overwhelming response – more than 200 enquiries!  So, at Mt Majura on Sunday 28 February, we fortunate few assembled at 4.30 p.m. for our educational ramble.

Our troupe travelled only a short distance in the 2 hours, but the range of fascinating facts that had emerged by 6.30 p.m. was truly phenomenal.  I expect you know that ants play a leading role in the environment as predators and scavengers.  You may be aware that their social organisation, communication systems and amazing navigation skills have been the object of research for generations.  Ajay led us deeper into this world, using a few of the 45 species found on Mount Majura to illustrate his subject.  The following is a brief summary of what I gleaned.

Australia has around 1,200 species of ant.  Ants have evolved from a wasp-like ancestor.  Ants differ from wasps (and bees) in three visible anatomical features –

In common with some kinds of wasps and bees, certain ant stings can hurt animals much larger than themselves, but most are harmless to humans.

We looked at four ant nests – 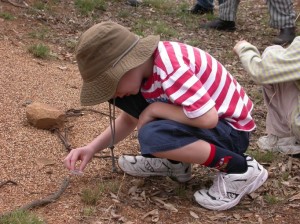 Meat Ants.
These are generalist daytime scavengers, collecting any kind of meat or insect or scraps.  Their gravelly, water-repellent nests have a lifespan of more than 10-15 years and may have about several thousands of ants in them.  Workers are all of one size.  On the foraging highways leading out from their nest, we saw the overnight shelters thoughtfully provided for laden stragglers who fail to get home before nightfall.  Meat Ants prefer the bush to the backyard, because there’s a good range of food supplies available.

Sugar Ants.
These ants have different sized workers for different functions.  There are special small workers who look after the queen and large-headed soldier ants, as well as foragers.  The foragers gather sugar from sucking insects (aphids, scale insects, mealy bugs etc).  Using their antennae, the foraging ants tickle the insects.  The pleasure must be considerable, for the insect then exudes a drop of honeydew for the caressing ant to harvest!
When new workers are being inducted to field-work, an experienced mentor ant will lead a small group of neonates to a suitable tree.  Showing remarkable care and patience, the mentor will advance a little way along the track, wait for the followers to catch up, and only move off when the followers tap her rear leg, signalling that they are all present and correct!
Some species of sugar ant are nocturnal and these nocturnal species have more and larger lenses in their eyes and wide light-capturing structures.

Bulldog Ants.
5 species of bulldog ant are found on Mount Majura.  They are large, aggressive ants with a sting like a wasp and large mandibles.  Their feet are equipped with grip-pads to keep them attached to prey while they attack!  Unusually for ants, they are very sensitive to movement. We saw some of the night active ants. They too, like the sugar ants seek out sap-sucking insects for their sweet secretions.  They will habitually visit the same trees looking for food. Nest entrances can vary from being small and inconspicuous to being large mounds like structures.

Jack Jumpers.
As the name suggests, these ants jump! They capture flying insects like flies, moths and also fed on earwigs, slaters and spiders. They have a nasty sting and some people might be allergic to it. How and why these ants jump is unknown and this is being currently studied at The ANU.

We also saw Greenheaded Ants – common in suburban lawns.  They raise not only their own young, but also the young of a remarkable parasite – a stick insect that behaves rather like a cuckoo!  The stick insect’s eggs look and smell like grass-seeds.  These are “harvested” by Greenheaded Ants.  When the eggs hatch out, they look and smell like ant larvae, so they are raised underground with the ant brood, to emerge next season and repeat the cycle!

We also learned something about the mating behaviour of ants, why mating occurs before rain, and that the altruism of ant behaviour may be due to their close genetic relationship with other members of their nest.

For me, and I think for everyone, it was a most rewarding event.  Thank you to FOMM and to Ajay.

Friends of Mt Majura would like to thank Ajay Narendra for sharing his enthusiasm and knowledge with over ninety participants of the two walks conducted on the 28 February and the 21 March 2010.

Dr. Ajay Narendra is part of the research team studying navigation strategies in Jack Jumpers (Myrmecia croslandi) in Hackett. Find out about Jack Jumpers and other ants on Ajay’s website at http://web.mac.com/ajaynarendra