It is a great pleasure to announce that Friends of Mt Majura (FoMM) have received the Landcare Community Group 2007 Award as part of the ACT Landcare 2007 Awards and the ACT Sustainable Cities 2007 Award in the category Urban Habitat in recognition of Project Dragonfly: Rehabilitation of the Majura dams.Established in 2003, FoMM has achieved remarkable improvements of our local bushland reserve, the Mt Majura Nature Park. This has been possible only through the significant contribution of many enthusiastic volunteers and support from rangers with ACT Parks, Conservation and Lands.

Congratulation and thank you to all of our volunteers and to the ACT rangers for their commitment and work over the past years. Well done! 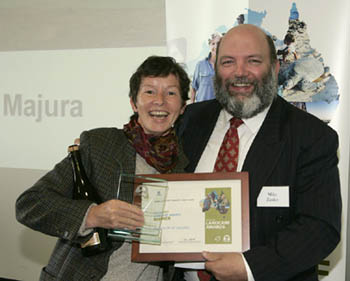