Download this poster for distribution
Enquiries: Ph 6247 7515 or e-mail admin@majura.org

The Rabbit Haemorrhagic Disease (RHD) had a huge impact on one of Australia’s worst pest species. Thirteen years after the release of the virus however, rabbit numbers are on the rise again. Hear from expert Dr. Brian Cooke the lessons learnt from an Australia-wide ‘experiment’ that were completely overlooked during earlier experiences with myxomatosis. What are our options to control rabbits so that ecosystems can be sustained and the decline of native vegetation can be reversed?

Dr. Brian Cooke has worked for over 40 years on rabbit related issues in state and federal governments and presently works with the Invasive Animals CRC at the University of Canberra. He was closely involved with the introduction into Australia of ‘Spanish’ rabbit fleas as vectors of myxomatosis and subsequently the introduction of Rabbit Haemorrhagic Disease (RHD).  He is now asking what might be done as rabbits develop resistance to RHD and threats to native vegetation again become apparent.

Rabbits in the nature reserves of north Canberra

In the past years many people noticed an increase of rabbit numbers in the nature reserves of north Canberra. Between December 2008 and March 2009 volunteers mapped rabbit warrens at the western foot slopes of Mount Ainslie and Mount Majura.  They found an average of 1.9 and in certain areas up to 2.5 rabbit warrens per hectare, some of which with more than 10 entries.

The vast number of rabbits associated with the warrens has a devastating impact on the endangered Yellow Box Red Gum Grassy Woodlands and other remnant native vegetation within the reserves including the animal species that depend on the plants for food and shelter.

In 2008 Friends of Mount Majura successfully lobbied the ACT Government to allocate funds for rabbit management within nature reserves. Work to control rabbits on Mount Ainslie, Mount Majura and the Watson Woodland has started end of March 2009. 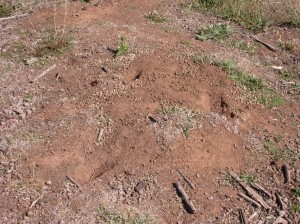