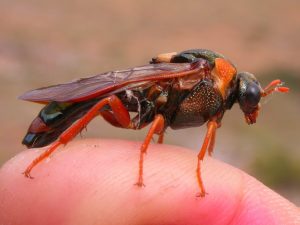 Since its inception in 2013, Canberra Nature Map (CNM) has grown phenomenally. Recently the award winning Citizen Science project expanded to cover all invertebrates and now provides a comprehensive coverage of all local wildlife of the Canberra region.

CNM is an on-line regional wildlife database that provides public access to over 1.127 million records of 3184 species, species lists for 570 locations and over 50,000 wildlife images and photographic libraries of ACT region species. Around 500 members of the public have added more than 15,000 records to the database, including around a half of all rare plant records ever recorded in the ACT, the first ever record of some significant native plants and potential major weeds (which have now been eradicated).

You can use a radius tool to find out what creeps, crawls, slithers, hops, flies and grows within 100m, 500m or 1km around any point of interest such as home, school or activity area. Smart phone applications enable users to rapidly search for species of interest in nature reserves and suburbs or capture a photo of a species and have it identified by a team of over thirty experts in our environmental community.

CNM has over 1000 visitors a day, and has become the authoritative source on ACT and surrounding region wildlife. Its real time update capability and widespread use by ACT decision makers mean that contributors know, the records they add in the morning can input into planning, development or land management decisions made that afternoon.

As an example of the breadth of information available for searching – and gaps that still need filling – within 1 km of the summit of Mt Majura are 1,436 bird, 90 lizard, 3 snake, 1 frog, 1 echidna, 1 swamp wallaby, 87 butterfly, 50 fungi and lichen, 88 orchid, and 419 other plant species records.

Get your smart phone ready when you walk next time on Mt Majura….

Perga dorsalis* belongs to a group of insects commonly known as Sawfly. The common name is misleading: sawflies are not flies. They are closely related to bees, ants and wasps and grouped in the insect order of Hymenoptera. The common name refers to the saw-like ovipositor, the egg-laying structure with which the female sawflies cut into the surface of a leaf and push the eggs into the leaf tissue. Adult sawflies are rarely observed. They live a short one-week lasting live without feeding, just long enough to find a host plant to deposit the eggs.

Their caterpillar-like herbivorous Sawfly larvae live several years. They congregate in clumps on their host plant which they can totally defoliate. Many people know them under their common name ‘Spitfires’ which refers to a defensive behaviour that involves the regurgitation of a thick liquid when the larvae are disturbed (actually the Sawfly larvae can’t spit and the liquid is harmless to humans).