Welcome to the August 2016 edition of the FoMM newsletter. This month we thought we would share with you a couple of fabulous photos of the snowfall on Mount Majura which occurred on Wednesday 13 July 2016. A very rare treat indeed.
See you on the mountain.
Jo Lynch
FoMM Secretary 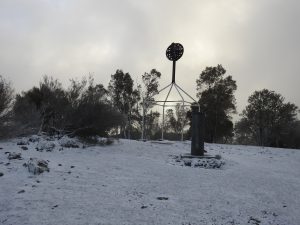 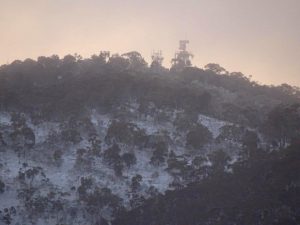 Mt Majura summit trig (G. Mcveigh) and slope below the radar (A. Clausen).

Working Party @ The Fair – Sunday 21 August, 1pm – 4pm
Come and help direct seed local native grass seeds at the National Tree Day planting site, give some TLC to the new seedlings and view the results of prior years’ planting efforts. Give as much of your time as you want. Parts of the grassy woodland in the nature reserve east of The Fair have become bare over the past years and show signs of active erosion. We hope that the direct seeding of native grass seeds combined with mulching and the planting of local wildflower species at National Tree Day will reverse the degradation, prevent erosion and improve the habitat and biodiversity values of the site.
Meet: Nature park entrance Tay/Ian Nicol Streets, The Fair, North Watson.
Bring: Sun protection, sturdy shoes; tools and tea will be provided.
Inquiries: email here
Click here for more information. 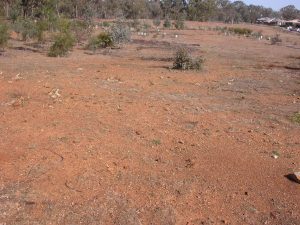 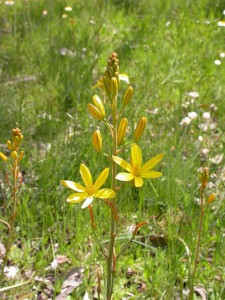 Left: Overgrazed, bare and eroding “grassy” woodland east of The Fair (W. Pix, May 2016). Right: …and how it should be – native ground cover layer with Bulbine lilies on Mt Majura’s north west slope (W. Pix, October 2005).

Report: Tree Walk on Sunday 24 July 2016 – by Thomas Brereton, with some closing remarks by Max Pouwer
On Sunday 24 July a group of intrepid aspiring botanists braved a looming hailstorm to follow Michael Doherty through the grassy woodlands and open forests of Mt Majura. Luckily the weather cleared as we set out into the Blakely’s Red Gum/ Yellow Box (Eucalyptus blakelyi/ E. melliodora) woodlands encircling the base of the mountain. In addition to identifying these dominant eucalypts, we learned the characteristic flakey bark of the Apple Box (E. bridgesiana), the large sickle shaped phyllodes of the Hickory Wattle (Acacia implexa) and the delicate foliage of the climbing Small Leaved Clematis (Clematis leptophylla). Crossing the powerline trail and climbing up to the stony western face of the mountain, the dominant eucalypt species shifted to the Scribbly Gum (E. rossi), on which Michael pointed out the distinctive dark scribbles left by burrowing larvae, and the flesh-like pressure ridges in the folds under the branches. The groundcover of grasses switched from a herbaceous carpet to dense tussocks of red anther wallaby grass (Rytidosperma pallidum) interspersed with frequent Urn Heaths (Melichrus urceolatus), Nodding Blue Lily (Stypandra glauca) and Bitter Cryptandra (Cryptandra amara). Read more… 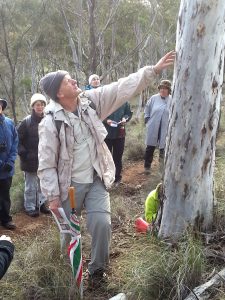 The Intrepid Landcare students of the Australian National University and the Majura Mountain Scouts joined members of the general public to plant over 300 local trees, shrubs and wildflowers on this 10th National Tree Planting Day hosted by FoMM. Conditions were fabulous on Sunday 31 July – it was one of these brilliant Canberra winter days and the soil was soft and friable after plenty of rain in the weeks before the event. Click here to view Steve Bittinger’s photo gallery of the day. Read more…. 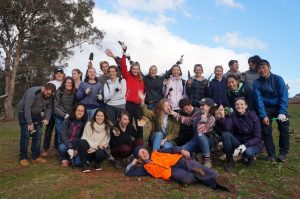 Canberra Nature Map latest growth: insects and other invertebrates
Since its inception in 2013, Canberra Nature Map (CNM) has grown phenomenally. Recently the award winning Citizen Science project expanded to cover all invertebrates and now provides a comprehensive coverage of all local wildlife of the Canberra region. CNM is an on-line regional wildlife database that provides public access to over 1.127 million records of 3184 species, species lists for 570 locations and over 50,000 wildlife images and photographic libraries of ACT region species. Around 500 members of the public have added more than 15,000 records to the database, including around a half of all rare plant records ever recorded in the ACT, the first ever record of some significant native plants and potential major weeds (which have now been eradicated). Read more… 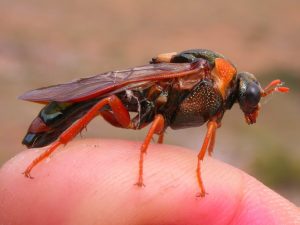 CSIRO seeking wild rabbit and hare samples
Over the past 8 years FoMM has worked with the Parks and Conservation Service to control rabbits on Mounts Majura and Ainslie with volunteers spending over 1000 hours mapping and collating data at three substantial monitoring sessions. Biocontrol is the most sustainable way to reduce this pest animal which significantly impacts our native plants and animals.

Rabbit Haemorrhagic Disease Virus (RHDV) is widely used as a biocontrol agent for the control of feral European rabbits in Australia. Currently, only one strain of RHDV is approved for biocontrol purposes, the Czech V-351 strain originally released in 1995. However, over time the effectiveness of this strain has decreased. To improve rabbit biocontrol, the Invasive Plants and Animals Committee are coordinating the release of a new strain of RHDV from Korea (RHDV K5), scheduled for release in Autumn 2017. Additionally, two further strains of RHDV, one from China and one from Europe (RHDV2), were detected in Australia in 2014 and 2015 respectively. Subsequently, RHDV2 has also been detected in hares. To track the distribution, spread and effectiveness of the various RHDV strains present in Australia now and after the K5 release, CSIRO are seeking samples from rabbits and hares that may have died from RHDV. From these samples, they can identify which strains are circulating in the area and how the various strains are interacting in Australian conditions. This will help to improve and guide rabbit biocontrol into the future.

The community can help with this research by collecting or reporting dead rabbits and hares that may have died from RHDV1 or RHDV2 (not shot/killed by humans, nor with other obvious other outward signs of death, such as road kill). Rabbits and hares that have died from RHDV2 typically look physically intact, lying on the side with legs stretched out and the head tilted back. Samples can be dropped off at CSIRO Black Mountain laboratories or you can use the RabbitScan App (available from the App Store or Google Play – search for FeralScan) or website. Full instructions on sampling and storage are available both in the App and on the website. By using FeralScan you can help them track the spread of all of these biocontrol agents and when the results are known, they will update your record and an email notification will be sent to you. Alternatively, you can take a photo of the rabbit or hare using your mobile phone. They can then use the GPS coordinates of the photo to return and collect samples. Click here to find out more or can subscribe to receive updates on rabbit biocontrol and the K5 release here.

National Science Week, 13 -21 August 2016
A host of activities are planned. This year the National Citizen Science project is Wildlife Spotter, recommended by the Inspiring Australia team at Questacon, where you can get online and look at the thousands of photos from cameras set up in the bush all over Australia, and help identify the animals caught by the camera. Great prizes include a school visit by Dr Karl Kruszelnicki.

Hollows as Homes
A new national program to register tree hollows and the wildlife using them was launched in March 2016 and is coordinated by the Royal Botanic Garden Sydney, University of Sydney, and Australian Museum. With the help of the community, this program aims to assess the availability of tree hollows and their use by wildlife across Australia. The Hollows as Homes team wants you to report tree hollows in your backyard, street, park, the bush and/or paddock on the official website. In addition to reporting ‘your’ hollows you can form groups to collectively report hollows and wildlife sightings at larger sites e.g. schools, parks, bush regeneration or landcare sites. Participants will take measurements of the hollow-bearing tree and periodically conduct monitoring and report the wildlife using this important habitat. Training is available through workshops and the website. Although primarily fauna-focussed, the information gathered will clearly also be useful for native tree conservation in urban and agricultural landscapes, and for strengthening the case for protection of some woodland and forest patches. The ANPC encourages everyone to sign up and send in data, and to make the program known through your own networks. For more information contact this email.